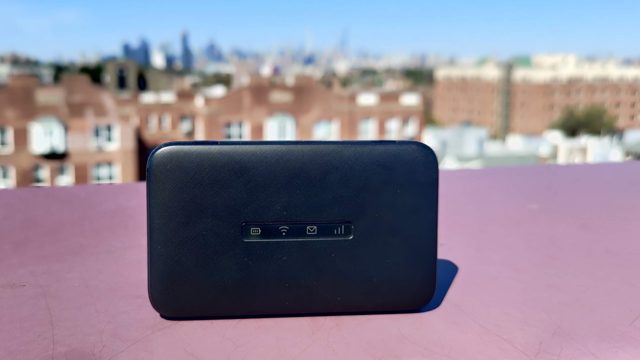 With remote schooling becoming the norm, it's absolutely critical to get everyone connected. The unlocked ZTE ZMax Connect MF928 hotspot works with AT&T- and T-Mobile-based prepaid services to offer the ultimate service plan flexibility. But its performance isn't up to that of a recent smartphone, so if you have the option to use your phone as a hotspot instead, that may work out better for you.

Wireless hotspots used to be primarily for business travelers, but they've become newly important in the COVID-19 era. With kids often unable to physically go to school, districts have distributed thousands of hotspots to people who don't have home internet connections in attempts to get them online. The ZMax Connect is exactly that "digital divide" kind of gadget, as it works with relatively low-cost service plans such as Red Pocket Mobile's $40 for 20GB and Boost's $50 for 50GB. Our model came with a SIM from T-Mobile-based Gen Mobile, offering 3GB for $20.

Like most low-cost hotspots, the ZMax Connect is an unassuming little black box, about the size of a playing card and as thick as your thumb. It measures 4.17 by 2.52 by 0.59 inches (HWD) and weighs 3.63 ounces. On the front there are four colored lights for battery, Wi-Fi, SMS messaging, and to show whether it's transmitting. There's no detailed battery or signal strength indicator like you see on more expensive hotspots. The default SSID and password are printed on the bottom.

There is one frill: a pair of TS9 antenna ports, so you can attach an inexpensive external antenna to improve the device's signal. The signal here isn't too bad (although performance is; see below), but it's always great to have that option.

Unlike with many other hotspots, the battery isn't removable here. It charges via micro USB, and when we tested it, it ran for almost exactly 10 hours using its 2,000mAh battery at the relatively low speeds this hotspot works at. That's a shorter battery life than the Alcatel LinkZone 2's 16 hours, but it's still a full work day.

The ZMax Connect supports LTE bands 2/4/5/12/66/71. That safely covers AT&T and T-Mobile, but not Verizon or foreign carriers. But the hotspot flounders on LTE performance.

There are a bunch of inexpensive hotspots out there all using the same, very old Qualcomm MDM9207 chipset—this one, both Alcatel LinkZone models, the MetroSmart, and others. The MDM9207 can only do 2x10MHz or 1x20MHz carrier aggregation and 64QAM encoding on download, and a single 20MHz carrier on upload. AT&T's and T-Mobile's networks have far more capacity than that now, but you can only see the better capacity and added speeds on a device with better carrier aggregation abilities.

The result is that no matter how good your AT&T or T-Mobile signal, you're not going to get fast speeds on the ZMax Connect. At my two test locations, I got 11-17Mbps on the hotspot with T-Mobile, and 12-14Mbps with AT&T. On a Samsung Galaxy S10 phone, I got 54-58Mbps on T-Mobile, and 132Mbps on AT&T. If you have multiple users in your home, that makes the difference between your Zoom calls breaking up or not.

It's worth noting that in my tests of the Alcatel LinkZone 2 back in June, I got faster speeds on T-Mobile than I did on this device in August. I don't think that's a testament to the superiority of the LinkZone 2, but rather reflects a more congested T-Mobile network in August, now that the carrier has lost some borrowed spectrum and gained a lot of Sprint customers. I'm also testing in a slightly different location than I did in June. What's important to take away is that both hotspots are much slower than recent flagship phones.

There's no hotspot available for T-Mobile or most prepaid carriers that offers better performance—they're all based on this lousy old chipset. There are currently no hotspots that support AT&T or T-Mobile's nationwide 5G networks, either. If you're on AT&T, the Netgear Nighthawk LTE will perform much better, but it costs $249.99.

Wi-Fi performance on the ZMax Connect was just fine. With LTE speeds so low, there isn't much call for super-fast Wi-Fi. I got 10Mbps down right next to the hotspot, and I got it 100 line-of-sight feet away. You can set the hotspot to 2.4GHz mode or 5GHz mode, but not both. You can also use it as a USB modem with a micro USB cable.

You can connect to the hotspot easily using WPS

Wi-Fi management options are basic. I like how ZTE now has a mobile app that gives you up-to-the-moment data usage information, as well as letting you change the hotspot's settings. Router settings include basic diagnostics, changing your Wi-Fi channels, MAC white listing, and port mapping. There are no parental controls and there's no guest network or file sharing option.

At $89.99, the ZTE ZMax Connect is one of very few truly unlocked hotspots available in the US, and it works with a range of affordable service plans on different prepaid and virtual carriers. There are better deals out there, though, if you commit to a carrier. Boost has the $49.99 Coolpad Surf with a 50GB plan for $50, and Metro has the $39.99 Alcatel LinkZone 2 with 20GB for $55. They're all based on the same platform and have similar performance. The other two hotspots don't have the TS9 antenna ports, but the Linkzone 2 has considerably better battery life and charges via USB-C.

I'm still frustrated and disappointed that T-Mobile and its prepaid brands don't offer any hotspot with better than rock-bottom LTE performance. T-Mobile has a mid-band 5G network it's building out right now, and families across the US are still trying to get over the digital divide during this year (or more) of COVID-19. The ZMax Connect is an affordable option for sure, but the internet it delivers is thoroughly second-rate.