The vivo iQOO 5 is arriving on August 17 as the first device on the market with 120W fast-charging. Today, the brand announced it has been certified by TUV Rheinland to be safe to use, and the phone is now listed at JD.com, revealing some key specs.

The new smartphone will have a Snapdragon 865 chipset, rather than the Plus version of the platform that recently debuted. It's a minor difference though so it can well be a typo. 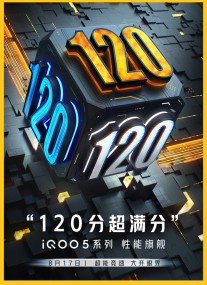 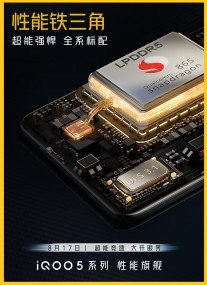 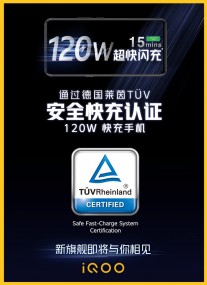 The chip will be accompanied by LPDDR5 RAM and UFS 3.1 storage – hardly a surprise seeing how its vivo iQOO 3 5G predecessor already employed those. We won’t be surprised to see some more similar specs like its 6.44” display and quad-cam setup with a telephoto lens arriving alongside the main cam and the ultra-wide-snapper.

Having the same screen and overall size means we are likely to see a smaller battery – instead of 4,440 mAh, it could be 4,000 mAh, since this was the advertised capacity of a battery cell that can go 0 to 100% in 15 minutes.

Another big question is the phone’s availability – it is launched in China but we hope it will follow the iQOO 3 and will hit the global market in the near future as well.