The Wyze Lock smart Bluetooth door lock has dropped to $89.99 on Amazon. Before today, the lowest it had ever been on Amazon was $98. We did see a deal in early August that dropped it to $88 through the Wyze website, but other than that today's drop is the lowest price we've seen. And, obviously, this is still pretty close. The lock normally sells for around $108 or so. 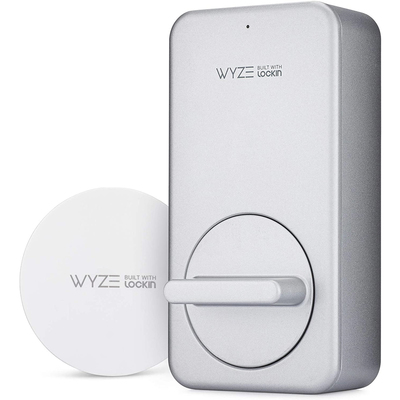 Comes with a Gateway and all the mounting gear you need. Locks and unlocks automatically just by approaching the door. Knows whether your door is open or close. Uses existing deadbolt, so keep your key. Connect to Amazon Alexa for voice control.

In the world of tech, Wyze is a company that builds itself around the idea of simplicity. All of Wyze's devices are super easy to use, have no crazy frills attached, and often go for bargain basement prices. The idea here is to remove all the hassle and stress of installing a new tech device while keeping the convenience of it. And that's exactly what the Wyze Lock does. You can install it in just a few minutes, and it uses your existing deadbolt setup. You won't have to lose or replace your keys, and when it works you won't need those keys at all.

The Wyze Lock is capable of automatically locking and unlocking your door. Connect the Lock to your Wi-Fi network using the included Gateway and the Wyze app on your phone. The lock will then be able to detect you when you approach the door and unlock it for you and no one else. Then, once you're inside, it will lock behind you. This eliminates any sort of worry you might have about whether the door is secure.

You can also share access as you see fit. Easily let in your dogwalker or visiting family, and keep track of everyone who has come and gone with a history of lock and unlock events. The Lock can detect whether your door is open or closed, too, thanks to the built-in gyroscope. Check on the door from anywhere using the app.

The Wyze Lock can also work with other Wyze devices like the Wyze Lock Keypad or Wyze Cam for added security.

Give your phone a heavy-duty clean with these UV cleaners

Keeping your phone clean on the inside is as easy as clearing cache files and deleting old, backed-up photos. Cleaning the outside of your phone down to the microbiotic level can be easy, too, if you have the right equipment.