Samsung's 10000mAh portable wireless charger has dropped to $34.99 through Best Buy. The device comes in pink and silver, but it's only the pink version that's on sale. The other one is going for $58, and both chargers normally sell for around $60 or so. Today's drop is the first major discount we've seen on this charger in more than six months, and you can find it price matched on Amazon as long as the deal sticks around. 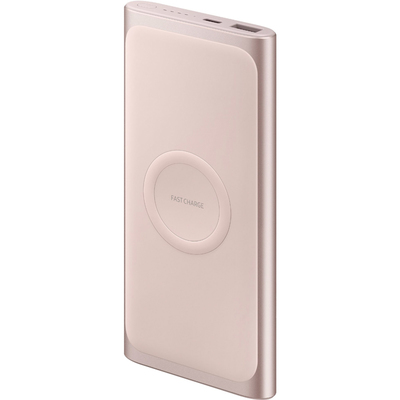 Has a wireless charging coil for Qi-compatible devices but also charges via the single USB port. Can do both at once. The 10000mAh battery is enough to fully charge your phone multiple times. Does 7.5W wireless charging and 15W via USB.

This is a great little device because it can charge via the USB-A port and via wireless charging. If you have a Qi-compatible device, like a smartphone or tablet, you can charge the battery by simply placing it on top of Samsung's power bank. This includes both Apple and Android devices, including the l atest phones. You can use the USB port to charge a separate device at the same time as both methods will work simultaneously. You can get 7.5W output from the wireless charger and 15W output from the USB port.

You'll also be able to use the indicator lights to see the device's battery power at a glance.

This is covered by a one-year warranty. Remember as part of Best Buy's deals of the day, the price won't last forever so it wouldn't hurt to grab one while you can. Keep this device in your purse or your backpack and pull it out whenever you need it.