The SteelSeries Glow Up all-in-one gaming bundle has dropped to $129.99 at Best Buy. The bundle often sells as high as $200. Target sells a similar bundle for the same price, but those devices are the wired versions instead of wireless. It's a really solid deal that combines several great SteelSeries products together.

Do all the things 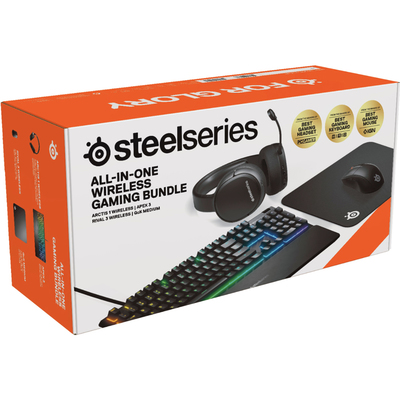 The bundle includes the SteelSeries Arctis 1 wireless headset, the Apex 3 keyboard, the Rival 3 wireless mouse, and a QcK mouse pad. Individually, these items would cost about $210 total. You're saving a ton by getting all this gaming gear in one package.

We still consider the QcK mouse pad to be one of the best mouse pads you can find on Amazon these days. It might be the least expensive thing in this bundle, but it'll probably outlast the rest thanks to its high-quality textures. It also has a non-slip rubber base and works great even on desks with a limited amount of space.

The Apex 3 keyboard has 10 zones of RGB illumination, IP32 resistance to water and dust to help save it from accidental spills, and super quiet gaming switches. It also has dedicated multimedia controls and a magnetic wrist rest.

The Arctis 1 wireless headset is the most expensive piece of the bundle, normally selling for $100 on its own. It has lossless 2.4GHz wireless connectivity, a portable USB-C dongle so you can connect to some platforms like Android phones or the Nintendo Switch, a detachable noise-canceling mic, and high-performance speaker drivers.

The Rival 3 wireless mouse has mechanical switches that can last for up to 60 million clicks. Use the scroll wheel has RGB LEDs that can actually tell you when the battery is low or when you've received an in-game notification. It uses 2.4GHz wireless, Bluetooth, and SteelSeries Quantum 2.0 tech for a lossless connection.