Let's just cut to the chase. The Instant Pot Duo Evo Plus 6-quart pressure cooker is on sale for $69.99 at Amazon. That's a huge drop in price for an Instant Pot that normally sells for $120 and has never sold for less than $100 before. So not only is this a brand new low price, it's also one that isn't going to last very long. The sale is part of Amazon's daily deals and new Black Friday week-long sales event, so it's scheduled to expire at the end of the day. 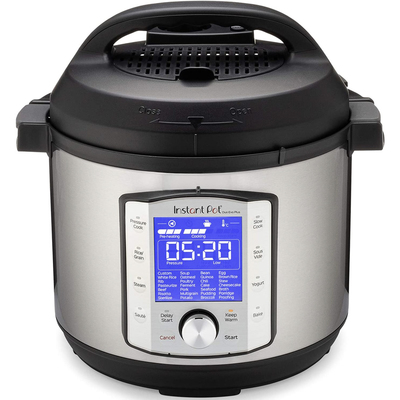 An upgrade of the original Duo series. Has 20+ enhancements and is the fastest lineup yet. Cooks 70% faster than traditional methods with a 1200w heating element. Has 48 customizable presets, 11 safety mechanisms, and cooks for up to 6 people.

The Duo Plus has a 1200w heating element, which helps reduce preheating time and makes meals faster. You'll cook up to 70% faster with the Instant Pot versus traditional means. Plus this cooker uses a new "quick cool" feature that shortens the pressure release time. The easy-seal lid automatically seals the pressure cooker, too, and the stream diffusing cover takes the fear out of the pressure release process. As someone who regularly uses his own Instant Pot, I can assure you the steam release part is the scariest part and I usually do it while holding an oven mitt and standing at arm's length from the cooker with my eyes closed.

You'll get 48 customizable preset options on this Instant Pot, too. It has settings built in for common meals like soups, beans, rice, ribs, and more. This even includes your attempts at becoming a chef with settings for sous vide and bake. Make some tasty desserts or a beautiful steak this way.

The Instant Pot inner pot makes the whole process even simpler. It has non-slip handles so it's easy to use and remove. It can also be used on stovetops with the flat inner surface. Plus it's easy to clean and even dishwasher safe. The pot holds enough food for six people.

This is a UL-certified device with 11 built-in safety mechanisms. It comes with a couple of accessories, too.

Check out our Black Friday sales for even more ways to save.