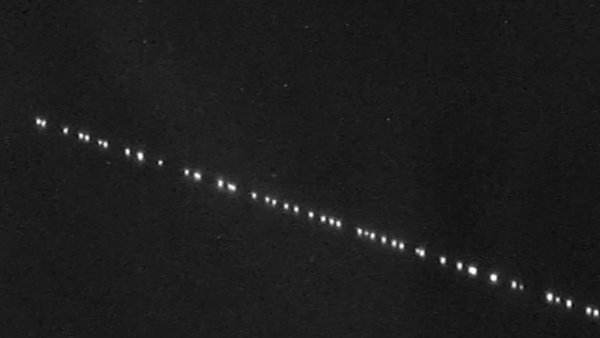 Last night I spoke about ways of seeing the Starlink satellites. They’re really easy to see right now and, as the weather is gorgeous and we’re all locked in our houses, what else are you going to do?

I’ve had a few emails about this already and a lot of people assumed that they’d missed “the satellite” last night. This, though, is wrong. There isn’t just one satellite. There’s hundreds of them travelling in a “train” across the sky. If you don’t see one, you’ll see another one within seconds. In the very near future, there’ll be thousands of these and they will be operating on different orbital planes. Read more about it in my article.

Indeed, at 9PM last night there was dozens of Starlink satellites flying over my head. They’re easy to see and, by simply putting the OnePlus 8 Pro we’re testing on the ground and randomly filming the right bit of sky, I captured three of them..

Another thing that needs to be realised about this system is that it’s not just a satellite connection for remote areas of the world.

These satellites are very different to the other satellites in the sky. If you’ve got internet via a satellite now, you’ll probably be aware of the latency. Some 638 ms or more. Although that doesn’t need much to many, it’ll show itself in a very slow response to your requests. This is because those traditional

satellites – the ones that don’t “move” in the sky – are really far away from Earth. It takes a long time for the information to get up there and then back down to your dish.

Here, with a mesh of much lower-hanging satellites flying closer to Earth, you’ll get really decent response times – similar to your normal broadband. Not only that, but trip-times across the world will be far faster than the fibre-optic sea-cables we’re using now. This is because your request will ping across the web of satellites to whichever part of the world you’re trying to get to.

This, if pricing and the subscriber equipment is right, will give you as a user another option for your internet connection. Not only that, but they can offer back-haul for mobile networks. That’ll mean that, as now, your mobile phone talks to a mast, but instead of being hooked up to an expensive fibre-connection, the mast will instead be connected to an ultra-quick set of satellites.