The Jabra Elite 45h on-ear Bluetooth headphones are down to $85 on Amazon in Copper Black. The other colors are all still going for the regular $100 price, and this is the first time we have ever seen even this version of the headphones drop from that street price before. 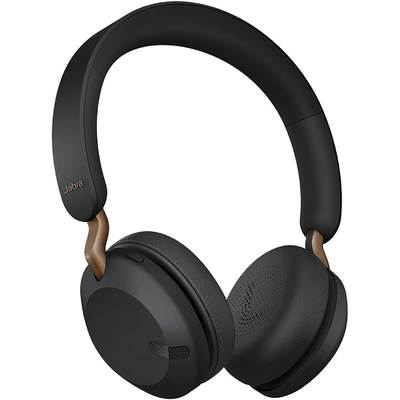 Just released in July, we've never seen a deal on these headphones before. They have a battery that lasts up to 50 hours, 2 mics for taking calls on the go, a compact and fold able design for travel, and an app where you can tweak the sound.

The Jabra Elite 45h were just announced earlier this year and only released in early July. They were designed by Jabra to be super affordable while still maximizing looks and sound, and they do a pretty good job of that. Plus, they have an insane battery life. The rechargeable battery will last you up to 50 hours on a single charge. That means you can travel comfortably or take these with you on a commute and not have to worry about them for several days. They'll always be ready to go. They can also take advantage of fast charge tech, so even when the battery dies you'll be up and running in no time at all.

The 40mm speakers are the biggest these headphones could possibly hold. You'll get clear and powerful sound quality no matter where you're listening to your music. Plus the two built-in microphones give you the ability to make or take calls no matter where you are. Touch a button on the side of your headphones and you have instant acceess to your connected voice assistant. Ask Amazon's Alexa, Apple's Siri, or your Google Assistant anything you want without picking up your phone.

The headphones are compact, lightweight, and foldable. They can go with you anywhere and fit easily into a backpack or purse. The ear cushions are made from memory foam so they will be comfortable and stay comfortable for a long time.

You can also personalize the sound using Jabra's MySound app. Get the music just right based on your own personal hearing profile.

ASUS's ZenFone 7 Pro doubles down on a triple flip camera

In need of a new look for your Fitbit Charge 3? Here are the best bands currently available for it!