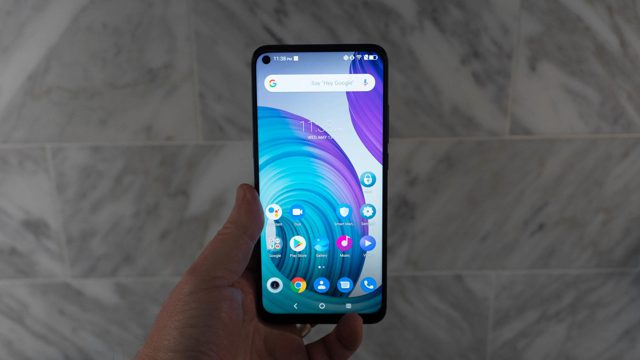 TCL makes plenty of budget-friendly phones for wireless carriers (typically bearing the carrier's name rather than TCL's), so the eponymous TCL 10L isn't far outside of its wheelhouse. At $249.99, it offers solid value for the price, with good processing power, above-average battery life, and a big, sharp display. But for the same price, the Motorola Moto G Power offers even longer battery life and a sleeker design, making it the better buy and our Editors' Choice.

The TCL 10L isn't ugly by any means, but it lacks the level
of refinement you get with the Moto G Power. The plastic back panel feels thin and would never be mistaken for glass. The camera stack is large
and overbearing, and the black fingerprint
sensor that sits right below it almost seems like an afterthought. They’re minor
issues, but they add up.

The front of the phone is home to a 6.54-inch, 2,340-by-1,080-pixel LCD with
a small hole in the top left corner for the selfie camera. The screen looks crisp, color accuracy is spot-on, and it’s bright
enough to see in direct sunlight without any problems. The screen-to-body ratio comes in at 91 percent, most of which is from the pronounced bottom bezel.

The back of the phone is blue and gives off a nice kaleidoscopic
effect. A horizontal camera patch makes its home at the top, with the fingerprint sensor just below it. While the fingerprint
scanner isn't attractive, it works far better than the many optical sensors we're seeing lately.

There’s a headphone jack on the top edge of the phone, and a USB-C port and a speaker on the bottom. The left side is
home to a customizable Smart Key, and the volume rocker and power button are on
the right. The buttons offer a satisfying click when pressed, but can be
difficult to reach if you have small hands.

Our main issue with the phone is durability—the 10L features no official protection rating, and our review unit quickly collected scratches. And
while we don’t expect full waterproofing at this price, the Moto G Power is at least
splash resistant. TCL includes a clear protective case in the box, which is a good starter, but you’re probably going to want to invest in a sturdier alternative.

The phone showed solid speeds on Verizon’s network in testing, with averages of 78.1Mbps down and 15.8Mbps up.

Call quality is solid, with a maximum earpiece volume of 86dB.
It’s loud enough to hear on a busy street without a problem, and noise cancellation
worked well, but was unable to block a heavy breeze on one of our test calls.

There’s a single bottom-firing speaker. Volume peaks at 93dB, which is loud enough for conference calls, but audio quality is otherwise poor. The single speaker is unable to create an immersive soundstage, timbre is unfocused
and muddy, and upper mids sound tinny. Luckily, there’s a headphone jack and Bluetooth 5.0 if you’re looking to up your listening game.

Dual-band Wi-Fi is available, but NFC isn't, which isn't surprising for the the price.

On the back of the phone, the primary camera clocks in at 48MP, complemented by an 8MP super-wide lens, and 2MP macro
and depth lenses. The front-facing camera is 16MP.

In good
light, the primary sensor takes some nice shots. Test photos show excellent depth of field
and good color accuracy. At full size you can see a loss of clarity, but you’re
not going to notice these flaws on your phone or on social media.

The super-wide lens loses some more detail and shows a bit of edge distortion, but again, if you’re
just sharing photos with friends or socially, you probably won't be bothered by these issues.

The macro lens is disappointing, with photos that look flat and
lack clarity. Your mileage may vary if you use a tripod, but no one will ever mistake a macro
shot from the 10L for one taken with an SLR or mirrorless camera.

Low-light photos are more hit or miss. The 48MP lens can
grab decent shots if you have a stable hand and use Night mode, though most of our
shots lack depth of field and show noticeable edge noise. Nearly all of our low-light super-wide shots have edge noise and complex distortion.

Selfies are solid, with good depth of field and color accuracy. Portrait mode photos,
however, shows halos and uneven
blurring around subjects.

The 10L is powered by a Qualcomm Snapdragon 665 chipset and
5GB of RAM. Storage clocks in at 64GB, with about 43GB available out of the box.
You can add up to an additional 256GB of storage with a microSD card.

Apps open almost instantly, and we had no problem multitasking. We were
able to keep more than a dozen apps and 25 Chrome pages open before we noticed any slowdown.

And while the 10L isn’t a gaming phone, it performs surprisingly
well. Load times are a little slow, but we tested the phone for nearly two
hours with Asphalt 9 and PUBG: Mobile and didn’t encounter any major issues. There were a few dropped frames in Asphalt 9, but nothing that interfered with gameplay.

On PCMark Work
2.0, a benchmark test that emulates typical smartphone tasks, the 10L scored 6,596, beating the pricier Samsung Galaxy A51

In our battery drain test, which streams
HD video over Wi-Fi at full brightness, the 10L's 4,000mAh battery lasted 10 hours and
48 minutes. While that doesn’t hold a candle to the Moto G Power (18 hours, 11
minutes), you should easily be able to make it through the day with more
conservative use. There’s no quick charge option or wireless charging, however.

The 10L ships with Android 10 and a custom TCL UI skin. While we prefer stock Android, TCL UI does add some interesting
features like the aforementioned programmable Smart Key on the side of the phone, and Nxtvision for upscaling SD video.
There’s also a feature called Super Bluetooth that allows you to share the phone's audio with up to four Bluetooth speakers.

In addition to Google’s typical suite of productivity apps,
TCL adds its own, which are nicely designed, but superfluous.

While we still don’t know many details about Android 11, TCL has pledged the 10L will receive a software update at some point after it becomes available.

The TCL 10L is a solid phone for the price, but it doesn’t
stand out from the crowd. There are no major deal breakers here, but for the same price, the Moto G Power manages to outperform the
10L in just about every way, with better battery life, stock
Android, and a much more refined design aesthetic. And if you like taking notes, the Moto G Stylus adds a built-in digital pen to the mix for $50 more.