The TerraMaster F4-210 4-bay network-attached storage device is currently on sale for $159.99 when you clip the on-page coupon at Amazon. The coupon takes $40 off the price, and this NAS does not drop from its regular $200 price without coupons like this. It has never gone on sale on Amazon before. It does seem to be back-ordered a bit, but you should still get it fast. Looks like Amazon is doing that with a lot of stuff to curb expectations. 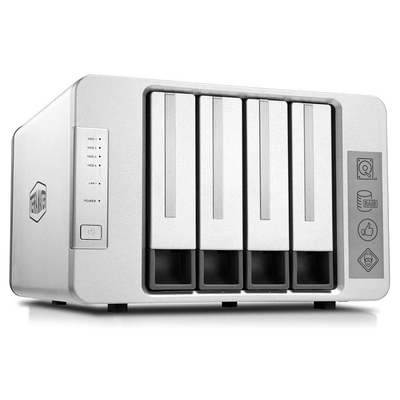 With coupon: Clip the on-page coupon

The TerraMaster is built to be a powerhouse of a machine. Network-attached storage devices are generally supposed to be after all. The idea is to connect this to your network, keep it secure both physically and hardware wise and dump all your shared media on it. This can be anything from photos to movies to important documents you might need to share in a small office setting.

The specifications for this particular device include an ARM v8 quad-core 1.4GHz processor, 1GB RAM, and read/write speeds of 114 MB/s. It has hardware encryption and support for media server subscriptions like Emby and Plex. It's compatible with 3.5-inch and 2.5-inch drives both hard drives and solid state drives. Each bay can support up to 16TB drives, too, for a total of 64TB if you want.

If you've ever wanted to set up a Plex media server before, this NAS makes it easy. It supports cloud drive sync, multiple backups, remote access, and a mobile app. It even has ultra-quiet heat dissipation technology.

This is a 4-bay system, but network-attached storage devices generally don't come with any storage by default. You'll want to add the hard drives yourself. You don't need to fill all four bays, but you usually want at least two so the NAS can set up a redundant system in case one fails. The WD Red and Seagate Ironwolf are both popular selections for these type of devices.