One of Best Buy's daily deals is the WD Easystore 16TB external USB 3.0 hard drive, and it's down to just $259.99 in this sale. That's $90 off its regular price and a ridiculously low price for so much space. You're basically paying less than $16 per terabyte. With 16 of those bad boys, you won't have to worry about filling up your storage anytime soon. This is a one-day deal that is separate from Best Buy's newest Black Friday event, the "Our Coolest Deals" sale, that just started today. 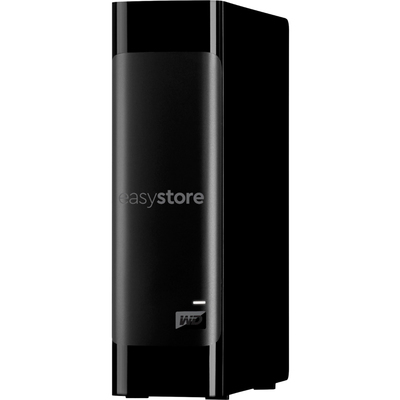 How much data can you store? This drive has the space for it! Uses USB 3.0 interface for speedy data transfer and it's backwards compatible with 2.0. Works on PC and Mac but needs reformat for the latter. Comes with 2-year warranty.

As a desktop external hard drive, the Easystore is not a drive meant to travel with you. It should be sitting on your desk serving as a semi-permanent storage for your media. Because of that, WD also makes it really easy to use these drives to back up your system. Use the WD Backup software and you'll be able to set a schedule that backs up your data regularly.

If you just want something for your photos, videos, and documents, use the WD Discovery software to back up all of that information easily. It can also manage your drive settings and give you better LED control.

Power and connect the drive with USB 3.0, which gives it data transfer speeds up to 5 Gbps. It's also backwards compatible with USB 2.0 for slower speeds but wider compatibility with more machines.

The drive comes formatted for NTFS and is compatible with Windows 7 or newer right out of the box. If you want to use this with a Mac, you can but you need to reformat it. So don't put any data on it before you do this or you'll lose that data. Once it is reformatted to work with a Mac, it can also be used with Time Machine for backup that way.

We've been seeing a lot of storage deals recently because of Black Friday. Keep on the lookout for more Black Friday deals if upgrading your storage needs is a priority for you.