Late last year, Amazon and Anker announced a joint project for your living room in the form of the Nebula Soundbar — Fire TV Edition. Essentially, it combines the smarts of a Fire TV Stick 4K with the audio-quality of a 2.1 channel soundbar in one device. It retails for $229 and has not deviated far from that price until now. Right now, you can save $70 and score one for just $159.99 which is the lowest it has gone since its release, though you'll have to act fast to get one at that price. 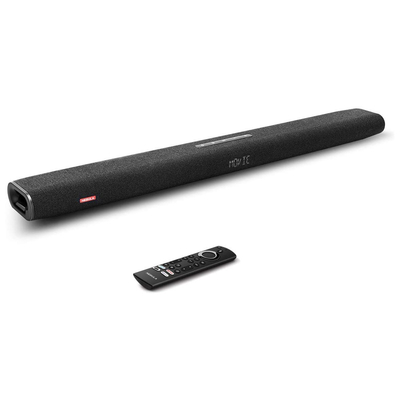 This soundbar brings cinematic sound and powerful streaming to any TV by combining a 2.1 channel soundbar with a Fire TV 4K streaming media player built-in. It also comes with an Alexa Voice Remote.

We all know that watching our favorite movies and TV shows is way better on a high-res screen. While you might have already upgraded your TV set, you can really make your favorite content sing with a soundbar. The Nebula Soundbar features a 2.1 channel design that combines 2 speakers and 2 subwoofers to create 100W of room-filling sound. While it might not compare to a high-end Sonos system, it'll be way better than your TV's built-in speakers and it's a steal at today's price.

As well as providing stellar audio, the Fire TV inside supports 4K resolution and 60 frames per second, as well as Dolby Vision for HDR. Of course, it's also got support for Amazon Alexa built-in via the included remote control. That means you can have Alexa control your soundbar and compatible TV functions like power, volume, navigation, and playback. You can also ask Alexa to find your favorite content.

Combining the Fire TV capabilities with your soundbar means you only have to plug one thing into your TV for both functions, freeing up another port for your console or other smart devices. The Nebula Soundbar also has a slim profile which helps it save space on your TV stand, and it also comes with wall-mounting hardware.

These are the best GaN chargers you can buy right now

Gallium nitride is one of the most exciting advances in charger technology in recent years, allowing us to shrink laptop chargers from bricks into slick little skipping stones. These are the best value and the more useful GaN chargers on the market so far.