It's that time of the year again, Samsung has put out yet another Galaxy Fold device. The epitome of elaborate and excessive design for us to collectively gush over and admire. Right? Well, yes and no. While there is little doubt that the Galaxy Z Fold2 is one of the most over-the-top devices the industry currently has to offer, with an eye-watering, prohibitive price tag of about EUR 2,000, "excessive" doesn't necessarily describe it any more. 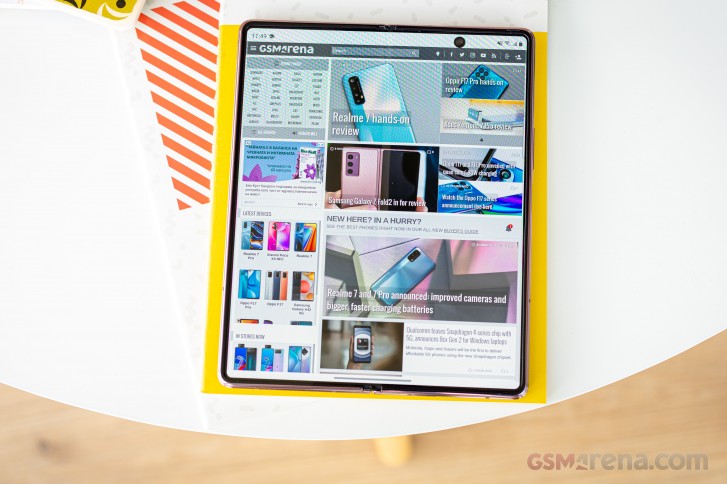 The Z Fold2 is a third-generation product depending on how you decide to count, making it clear that Samsung is not backing down on the foldable display form factor.

It is safe to say that foldables are no longer conceptual tech showcase devices and judging by the name change, they will have their own product family within Samsung's portfolio – the Galaxy Z.

Foldables are maturing quickly and while it's too early to call them mainstream – that's definitely not going to be today and it might not even be within the next couple of years – but the process is clearly well underway and we'll get there eventually.

More than anything else, the Z Fold2 embodies technological, product, and design maturity. In absolutely every conceivable way, the Z Fold2 is a more mature and polished iteration over its predecessor. 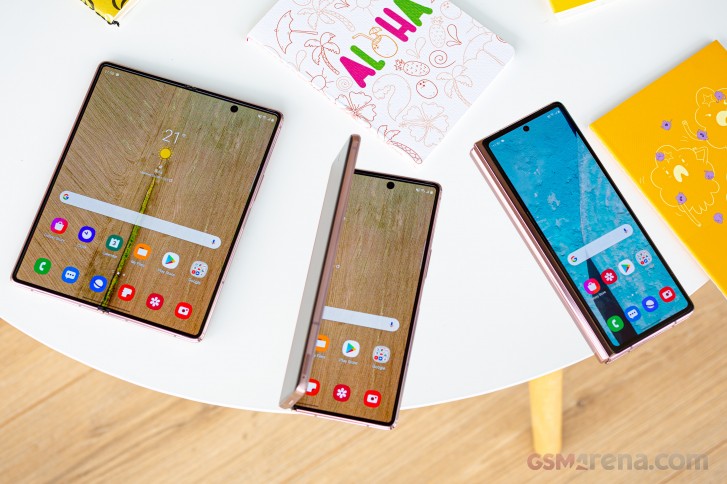 The design itself is greatly refined. This includes major mechanical improvements, like the new smooth-motion Hideaway hinge, with Flex mode support, significantly tighter display r-curve, when closed, and much bigger and more usable secondary display.

The updated curves and edges in the design and the new surface finishes all contribute towards the perception of a more finished overall end-product.

And that's hardly the full list of improvements the Z Fold2 brings to the table. There are numerous other hardware and software bits, which we will be getting to in more detail on the following pages. 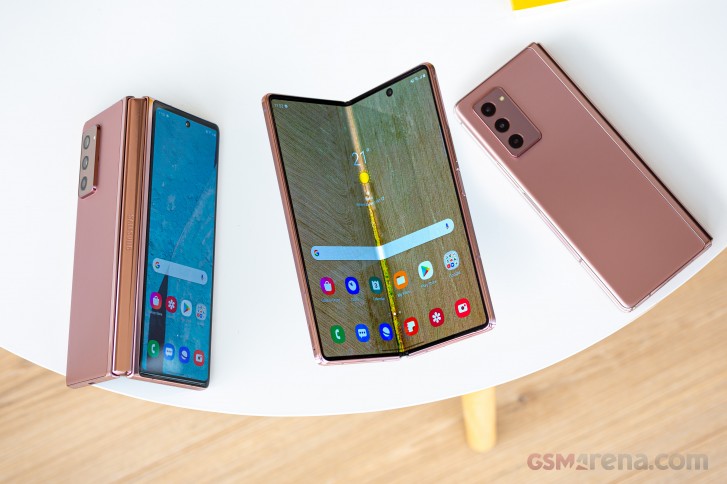 Just like its predecessor, the Z Fold2 comes in a large, lavish box – a necessity, since the phone ships in an unfolded state.

Right out of the gate, you are reminded just how different of a device this really is. A tablet-sized display, just waiting for you to gently squeeze it closed and put it inside your pocket for the first time. 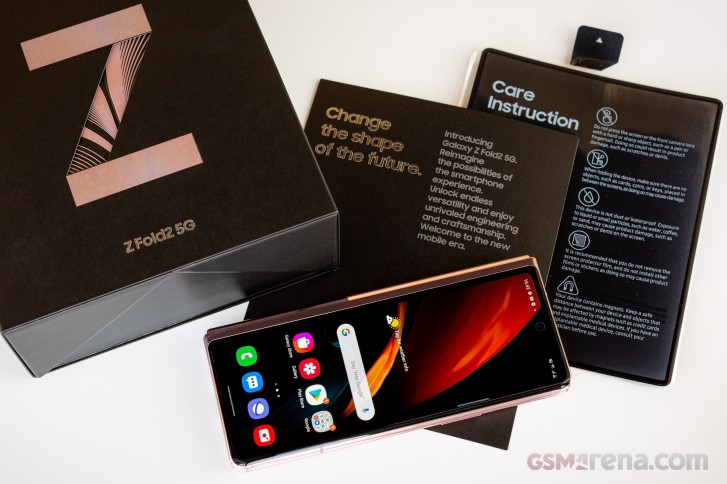 And if that doesn't convey the futuristic vibe well enough for you, there is also a handy pamphlet included, titled – "Change the shape of the future". It tries its best to convey a sense of just how paradigm-shifting of a device you might just be holding.

Following that Samsung-fueled daydream about the future of technology, we have a rather abrupt, but necessary reality-check, with a huge "Care instruction" sticker on the display of the Z Fold2. Despite continued improvements in the field, foldable displays and their supporting, folding mechanical structure remain fragile.

Samsung warns against applying too much pressure to the display. Especially with sharp objects. All it takes is a quick trip on YouTube and a good stomach to see how puncture-prone the foldable panels are and the kind of gory consequences that has. 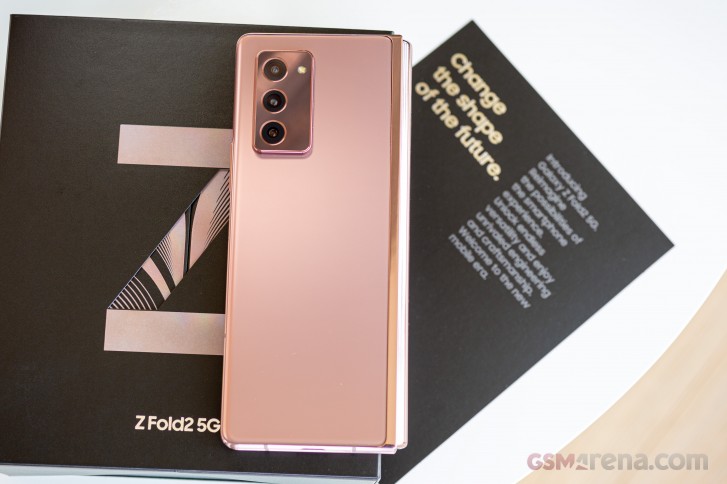 Also, we get a good reminder that the Galaxy Z Fold2 does not have any official ingress protection rating. Not really possible with current manufacturing and tech.

Another important note, harkening back to scandals with the pre-production units of the original Galaxy Fold – there is a pre-applied protective film on top of both displays of the Galaxy Z Fold2.

We can't imagine removing the outside one is a major deal of any kind, but Samsung specifically warns against tampering with the inside one. Mind you, there have been some discussions on the matter, with Samsung themselves and it seems that in this particular case, the layer is an extra protective one and can be removed safely. More-importantly, potentially replaced.

One thing is for sure, the accessories bundled with the Galaxy Z Fold2 are far less impressive than those of the old Galaxy Fold. You only get a 25W wall charger with a USB Type-C to Type-C cable and a pair of corded, Type-C AKG earbuds. These are clearly a downgrade from the Galaxy Buds that shipped with the Galaxy Fold. Perhaps what stings the most, though, is the lack of a case in the box. 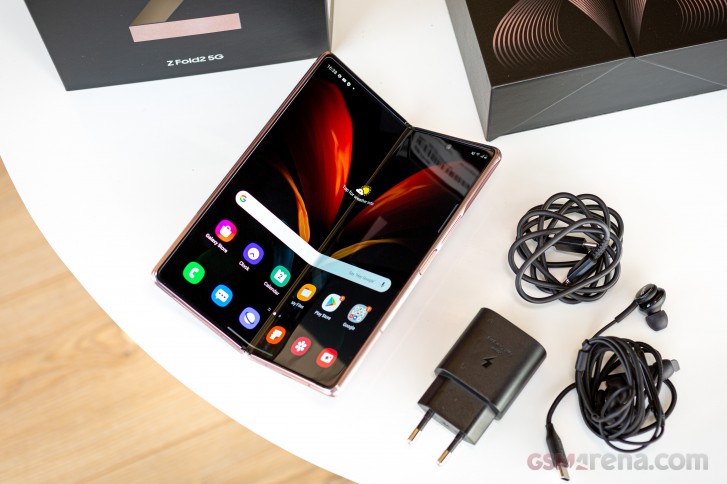 On a device, where certain care and attention is in order, having to source a case separately from Day 1 is a bit of a bummer.

However, there is an alternative way of looking at the more toned-down accessory package. Namely, that it's a sign that the Z Fold2 is maturing into a regular retail product. One that Samsung expects to ship more units of. Hence, considerations of accessory costs for both the manufacturer and the user come into play. Of course, we're just guessing here but for a price tag of 2000 bucks, the contents of this retail box are anything but lavish.