The stream of Samsung announcement continues – after the two Galaxy Note20 phones and two Galaxy Tab S7 tablets, there is also a new smartwatch – the Galaxy Watch3. It comes with the ability to measure the blood oxygen levels (SpO2) and will also provide blood pressure and ECG readings. 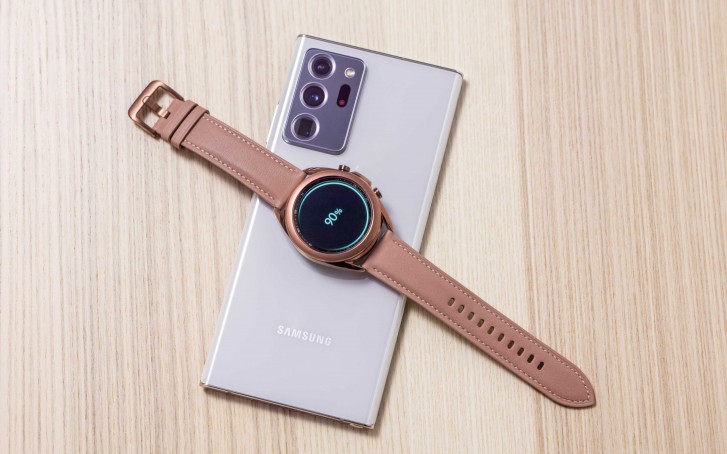 The smartwatch comes in two sizes – 45mm and 41mm, with respective screen diagonals of 1.4” and 1.2”. The panel is Super AMOLED with a resolution of 360 x 360 pixels and has Gorilla Glass DX on top for protection. The bezel will be able to rotate and used for some navigation in the OS.

On the inside we’re looking at an Exynos 9110 chipset with dual-core CPU at 1.15 GHz. It has 1GB RAM + 8GB storage at its disposable and there’s also a version with LTE modem and eSIM.

The Samsung Galaxy Watch3 offers IP68 water and dust protection and is compliant with the MIL-STD-810G standard for durability. The battery is 340 mAh or 247 mAh, depending on the size, and comes with wireless charging, as well as the standard one with magnetic circular pad.

Samsung stays loyal to its wearable OS – the Galaxy Watch3 comes with Tizen 5.5. The company cautiously reminded in a press release that while the watch will have a blood oxygen sensor, the actual feature won’t arrive until later this year. The BP, ECG readings will be market-dependent as they need to be authorized by local health authorities.

The wearable is said to be the ultimate partner for training, and Samsung developed the software to offer real-time feedback and Running analysis (also available later this year). The cardio progress will be tracked by VO2 Max readings, tutted by some like the one measure you should take into account when running.

Another feature Samsung is really proud of is its sleep management. It isn’t a new feature per se, but with the Galaxy Watch3 it will bring new sleep score and more accurate insights to help you get better rest. All Galaxy Watch3 owners will have access to over 120 different video workouts on Samsung Health that can be performed at home since many people remain confined at home for the near future. Video can be played on any device and Galaxy Watch3 will track it live, giving step-by-step navigations.

The Samsung Galaxy Watch3 integration with the Galaxy Note20 smartphones include automatic reply options both for messages or gifs/images, and will also offer hand gestures like clenching or unclenching fist to receive a call, but that has to be turned on/off through the Labs menu in the Galaxy Wear app. The smartwatch will be available starting August 6 in select countries, while Europe will get it on August 21. Both sizes are available in Wi-Fi only or LTE + Wi-Fi variants in Mystic Silver color. The 41 mm Galaxy Watch3 will get the Mystic Bronze color option, as well as Mystic Silver. The 45 mm will be offered in either Mystic Silver or Mystic Black, and later this year will arrive an exclusive Titanium variant.