Samsung is expected to launch its Galaxy S20 Fan Edition soon. We’ve been seeing plenty of leaks over the last weeks and the latest one comes from China’s TENAA agency which confirms the key specs of the 5G model.

The phone with model designation SM-G7810 is listed with a 6.5-inch display, 4,500 mAh battery which we also know will support 15W wired charging and dual SIM capabilities. We’re also briefed on the phone’s dimensions which come in at 159.8×74.5×8.4(mm) which puts it right between the Galaxy S20 and Galaxy S20+ in terms of size. 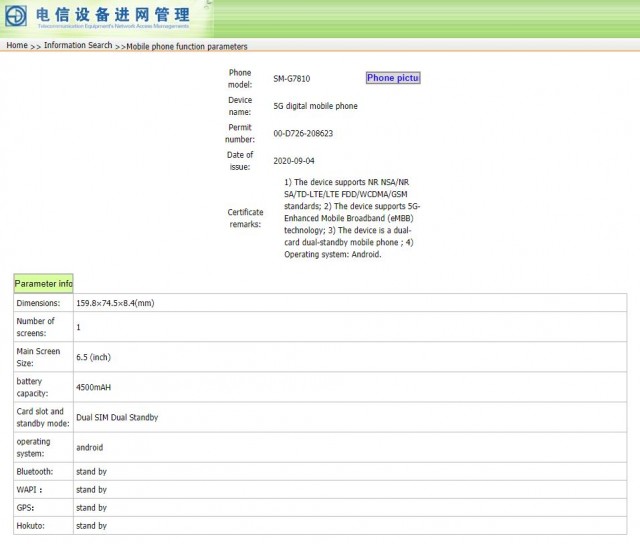 A recent giant leak gave us a detailed look at what else we can expect from the S20FE. The phone will feature a 120Hz SuperAMOLED display with Gorilla Glass 3 protection and a 32MP selfie cam. Around the back, we’re getting a 12MP main camera with OIS alongside a 12MP ultrawide snapper and an 8MP telephoto module with 3x optical zoom.

The S20 FE will come in 4G and 5G configurations with the former running Samsung’s in-house Exynos 990 and the latter opting for the Snapdragon 865. Other notable features include IP68 protection, Wireless PowerShare and an in-display fingerprint reader. The phone will also arrive in a whopping six color options.