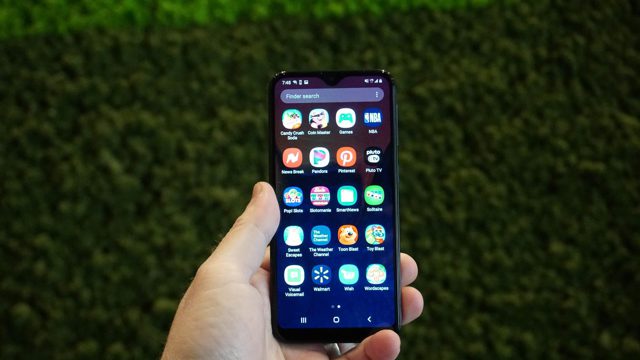 The Samsung Galaxy A10e ($179.99) looks like a winner. It’s a small, handsome phone that feels good in the hand. But a phone can't succeed on looks alone. And from lackluster performance to underwhelming media capabilities, the A10e leave a lot to be desired. For the same price, the Motorola Moto G7 Power offers superior hardware for a better experience all around.

The Samsung Galaxy A10e is simple but attractive. At just 5.8 by 2.7 by 0.3 inches (HWD) and 5.0 ounces, it’s small, light, and comfortable to handle. There’s a teardrop notch for the camera on the front and a chunky bottom bezel, but the proportions work well so it doesn’t look cheap.

The front of the phone is dominated by a 5.8-inch LCD. Resolution comes in at 1,560 by 720, for a respectable density of 296 pixels per inch. The screen is bright and colors are vivid, making it good for videos and other casual use.

The back is constructed of a glossy blue polycarbonate. There’s a single camera lens in the upper left corner, along with carrier and Samsung branding. The top edge is bare, while the bottom is home to a headphone jack, a USB-C port, and a speaker. On the left you’ll find a hybrid sim/microSD slot, while the volume rocker and power buttons sit on the right. Both are easy to reach with even small hands and offer a satisfying click when pressed. There's no fingerprint sensor, which is an odd and frustrating omission.

While the phone’s plastic back will most likely withstand minor drops, it’s unlikely the display will fare as well. There’s also no waterproofing or splash resistance, so you'll want to invest in a protective case.

Network speeds on Cricket (which uses AT&T's network) were poor in testing. Over the course of a dozen tests, the phone consistently averaged speeds of just 4.84Mbps down and 1.61Mbps up.

Call quality is decent. Earpiece volume peaks at 84dB, which is loud enough to hear on busy streets. Test calls were okay, albeit with some static and clipped words. Noise cancellation worked well in most circumstances, but some construction sounds managed to seep through on a few calls.

Maximum speaker volume comes in at 89dB, which can easily fill a room, but it sounds tinny and muddy at just about any volume. At higher volumes, there’s noticeable static and distortion. Fortunately, there’s a 3.5mm jack and Bluetooth 5.0 for wired or wireless headphones.

The phone also supports dual-band Wi-Fi, but not NFC.

The rear camera performs well in good light. Our daylight test shots featured excellent depth of field and color accuracy. There was some loss of fine detail in many images, but not enough to take away from the overall quality.

Low-light photos were uniformly poor, however. Nearly all of our test shots were flat and muddy, with over-aggressive noise cancellation creating unnatural blurring in the foreground and lens flare.

The selfie camera does a fine job in good light. Our test shots were crisp, with good color accuracy and depth of field. While the front-facing camera has beauty and color filters, there’s no portrait mode.

In low light, none of our test shots looked good enough to even share on social media. For the most part, they all featured significant noise, looked flat, and were very blurry.

The Galaxy A10e sports a Samsung Exynos 7884 chipset with 2GB of RAM. There’s 32GB of storage, of which just 16GB was available out of the box on our Cricket review unit. Fortunately, you can add up to an additional 512GB of storage with a microSD card.

At times, the A10e can be frustratingly slow. Apps take over a second to open, and screen transitions have a noticeable lag. When you start to multitask, these issues become even more evident. If you’re the type who likes to keep dozens of apps or tabs open in the background, this isn't the phone for you.

Needless to say, this also isn't a good phone for gaming. We tested it with Asphalt 8 and PUBG: Mobile, which both experienced noticeable lag when loading, as well as skipped frames. PUBG crashed twice over half an hour of gameplay.

On the PCMark 2.0 Work benchmark, a suite of tests that emulate typical smartphone tasks, the A10e scored just 4,562, a far cry from the similarly priced ZTE Blade 10 Prime (7,527).

The A10e is powered by a 3,000mAh battery that should be able to get most people through the day. In our battery drain test, which streams HD video over Wi-Fi at full brightness, the phone lasted 10 hours and 17 minutes. With more conservative use, you should be able to add a few extra hours. When you find yourself running low, the phone supports 15W fast charging with an optional adapter.

The Galaxy A10e ships with Android 10 along with Samsung’s custom UI. Samsung’s take on Android is elegant but heavy-handed compared with other manufacturers. Everything from the notifications bar to the settings menu is just a little different. It’s not bad, it’s just a departure if you’re used to stock Android.

The unlocked version of the A10e has Samsung’s suite of productivity software; we think Google’s apps are more refined and offer greater flexibility if you switch to a new phone. Our Cricket review unit shipped with nearly two dozen extra apps that took up lots of storage space. Fortunately, nearly all of the apps can be uninstalled, but it's frustrating to see such a heavy load of bloatware.

The Samsung Galaxy A10e is an attractive phone, but it fails to nail the basics. For the same price, you can pick up the Moto G7 Power, a phone that outshines the A10e in just about every way, from performance to battery life. And if you’re willing to spend a bit more, the new Moto G Power ($250) is an additional step up, and the best budget-friendly phone you can buy right now.