Realme announced its first global 5G device at the end of February – the X50 Pro 5G. Today it revealed the device will also make it to the domestic scene, where it will partner the X50 5G which has been selling for about three months.

The launch date is scheduled to be March 12 at 2 PM local time, and the phone will arrive in the same two colors as the global edition – Moss Green and Rust Red. Some leaksters suggest there could be another, Master Edition, but we have to wait until next week to see whether or not this is true. 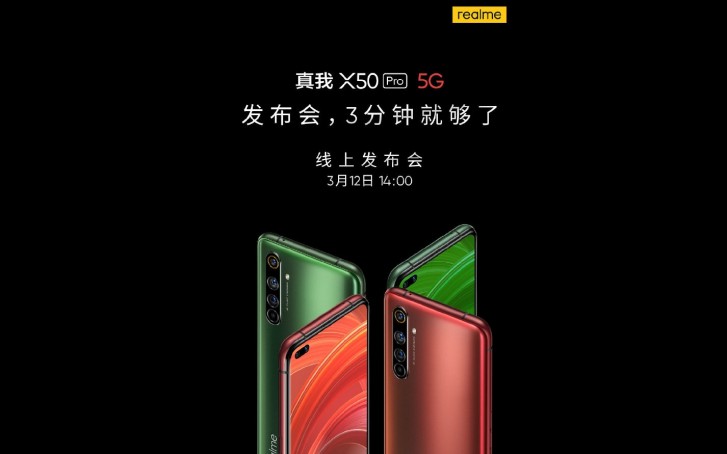 The X50 Pro 5G is Realme’s first true flagship of 2020 – it has a Snapdragon 865 chipset, Super AMOLED screen with under-display FP scanner, punch-holer design, and 90 Hz refresh rate, and the latest OS and Realme UI.

Camera-wise it is not a big upgrade from the SD855 Plus-powered Realme X2 Pro – a 64 MP main shooter, coupled with a telephoto lens with 2x optical zoom, 8 MP ultra-wide-angle cam, and a depth sensor, which this time is B/W.

The price of the Realme X50 Pro 5G starts from €599 and goes up to €749. Usually, the devices are about a fifth cheaper in China (although they lack Google services), so we expect the starting price to be somewhere around CNY3,999, which is just north of €510/$575.