We are well aware that a vanilla Realme X3 is on the horizon. It was even teased in an official video, alongside text referring to the company’s “next flagship”. This, naturally, puts certain expectations on the specs of the handset. Ones that, however, leaks still can’t quite back-up or agree on. Last time we got some alleged numbers, regarding the regular Realme X3 was from a Google Play Console entry, which included a display resolution of 1,080 x 2,400 pixels, Android 10 OS and for the more perplexing bits – a Snapdragon 855+ and 8GB of RAM. 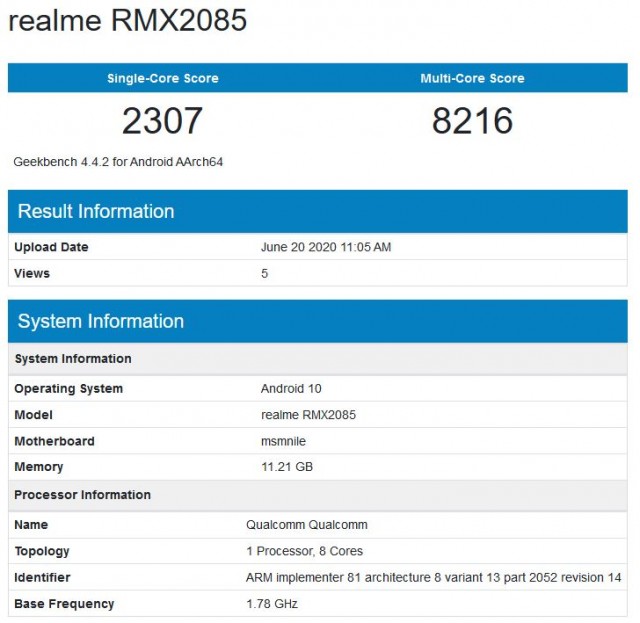 That essentially put the X3 neck-to-neck in raw performance with its already official and reviewed X3 SuperZoom sibling, in its base specification. Hardly the company’s “next flagship” in conventional terms, especially after a different still Realme X3 Pro (RMX2121), appeared on TENAA and then AnTuTu, with a full-fat Snapdragon 865.

Looking at this new GeekBench entry for the RMX2085 or Realme X3, a few things stick out. First, the 12GB of RAM, which contradicts earlier rumors of 8GB and potentially bumps its status up closer to flagship territory. However, the actual posted single and especially multi-core scores are far from Snapdragon 865 territory. For reference, we expect something in the ballpark of 13300 points for a Snapdragon 865 on GeekBench 4. Continuing with the same logic, the Realme X3 SuperZoom also scores higher with its Snapdragon 855+ chipset at around 10000 points.

Meaning that we are a lot more inclined to guess that the Realme 3 will be based on the Snapdragon 765 or 765G. Perhaps even the 768G. The fresh new Snapdragon 690 would also be worth looking into, were in not for the seemingly impossible timeframe for its integration. The only thing we really know with a fair level of certainty from this GeekBench page, though, is that the tested unit ran on a Qualcomm chip, since the “msmnile” designation is kind of an umbrella identifier for Snapdragon silicon.