The new firmware brings improved notification management, which now displays up to 10 notifications in the form of a drop-down list on the smartwatch. Previously, the Watch only displayed one notification, like the Realme Band, meaning new alerts replaced the older ones. This has been one of the major complaints from Realme Watch users and we are glad the issue has been finally addressed by the company. 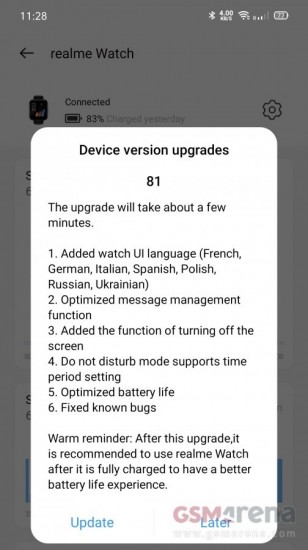 The update also adds support for seven new languages to the watch UI and now lets you enable and disable the Do Not Disturb (DND) mode automatically at your preferred time. Besides, the firmware optimizes the battery life and squashes some known bugs. You can check out the full changelog of the update below: