. Yet several YouTube channels already posted their unboxing videos. Here’s a sneak peek at the new entry level handset from the brand. 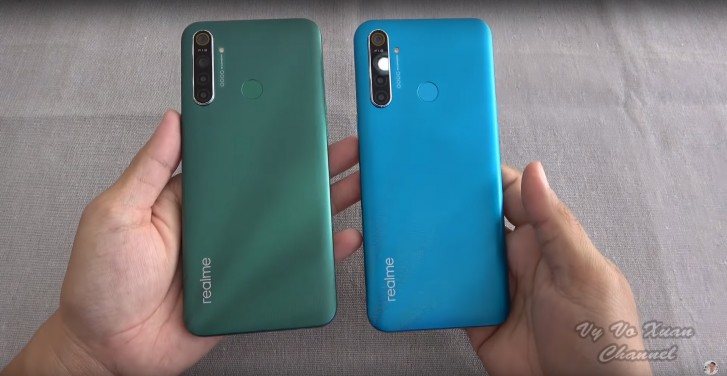 Starting with the box contents, the phone comes with a 10W charger and microUSB cable. The specs of the phone itself have little by little been unveiled by Realme – 6.5” 720p screen, Snapdragon 665 chipset and a 5,000mAh battery.

The back of the Realme 5i has a wavy texture pattern and is home to the quad camera and fingerprint reader. The camera setup is 12MP regular, 8MP ultrawide, 2MP macro cameras and 2MP depth sensor on the back, plus an 8MP selfie camera in a teardrop notch on the front.

This first video unboxes two units, a blue and a green one. Both colors have the wavy texture embossed into the plastic back (the frame is also plastic). These are dual SIM devices with a dedicated microSD slot and a 3.5mm headphone jack on the bottom.

Besides the outdated microUSB connector, the other disappointing thing is the older OS – Android 9 Pie styled as Color OS 6.

You can see benchmarks and camera samples later on into the video. Next up is another unboxing – this one has commentary, though it’s not in English. Then one more video, that compares the 5i to the 5.

The official announcement is coming later today and should bring details about launch markets and prices.