Oppo announced its next generation periscope camera – just the module for now, but the first phones to use it can’t be far behind.

The module features a 7-element lens and is capable of adjusting its focal length from 85 mm to 135 mm (in 35 mm equivalent). The aperture starts at f/3.3 and ends at f/4.4 at the at maximum zoom. A new 16-bit high-precision driver IC accurately moves two groups of lenses for zooming as well as autofocus and optical image stabilization.

It’s not just a new lens, Oppo has worked on the sensor and image processing algorithms too. The “large” sensor (no dimensions given) has 32 MP resolution and a Quad Bayer filter. Using image stacking, the camera is capable of up to 280 mm hybrid zoom.

Assuming a 26 mm wide lens on the main camera, this module offers optical zoom from 3.3x to 5.2x, then hybrid zoom takes that up to just under 11x magnification. 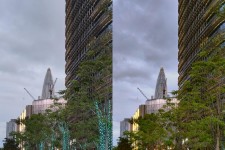 A suspected successor to the Oppo Reno 10x zoom appeared on TENAA last month with talk of an upgraded periscope. That phone featured a 6.5” 90 Hz AMOLED display, 5G connectivity and a 3,945 mAh battery. Speaking of, Oppo is working on 125 W charging technology, which is also bound for future flagships.