A new Oppo midranger has been certified by the Global Certification Forum under the market name Reno4 Z 5G. The model number is CPH2065, revealing the very same device has already received approval by the Bluetooth SIG and the Federal Communications Commission.

According to previous leaks, the CPH2065 phone has the same specifications as the Oppo A92s 5G, meaning it could escape China under a new disguise. 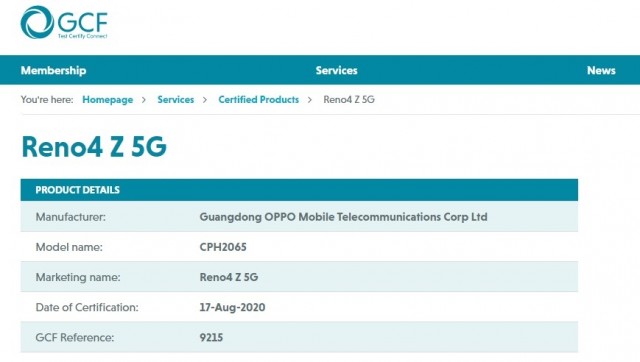 Even if rebranded, the phone will be the very same Dimensity 800-powered handset with 6.57” LCD in front. On the back, there will be four cameras, aligned in a square setup with an unusual design solution emphasizing on the main + ultra-wide-angle snappers.

While the name Oppo Reno4 Z 5G has “5G” in it, the GCF does not say anything about any potential bands – it only lists 2G GSM, 3G UMTS and 4G LTE networks. Even if the phone launches with 5G capabilities, it might not work at some countries that are yet to develop and implement their next-gen network.