The foldable Motorola Razr 5G is an improvement on the original in just about every way. 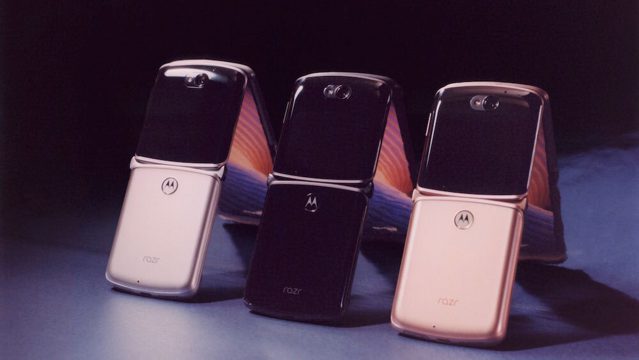 Just months after releasing its first new Razr phone in years, Motorola is back with an updated take on its iconic clamshell, giving the high-end folding handset a major overhaul. The new Razr 5G has a faster processor, a more intuitive user experience, and a much improved camera. There are some aesthetic improvements as well, not to mention, of course, the addition of 5G. And at $1,399.99, it's priced to compete with the Microsoft Surface Duo and the Samsung Galaxy Z Fold 2. We got a chance to see the phone ahead of Motorola's announcement and have some first impressions.

At first glance, the Razr 5G looks a lot like its predecessor. The form factor is the same, and so is the retail packaging. But if you look closer, you’ll notice a few key differences.

For starters, the stainless steel chassis of the original has been replaced with aluminum. The chin bezel is more refined, and the fingerprint sensor has been moved to the back of the phone. Curved glass and a less pronounced camera bump make for a more elegant look and feel.

The Razr 5G’s hinge is still rated for a minimum of 200,000 folds, or about five years of use, but Motorola made some tweaks to it. The biggest difference is that the clasp is a little stronger than on the previous model, and feels more like the hinge on an old-school Razr. It also doesn’t pop out when folded. And unlike the last model, we haven't noticed any creaking noises when opening and closing the phone.

In addition to the 2.7-inch display on the front of phone, there’s a 6.2-inch flexible POLED screen when you open it up. It’s the same display as on the previous Razr, which means there are no noticeable creases, but you can feel some dips and bumps where the hinge mechanism is located.

Unfortunately, the Razr 5G still lacks an IP rating, but Motorola has added a water-resistant coating to the external ports as well as the internal components. So while the phone may not be able to withstand a dunk in the pool, Motorola assures us it can handle sweat, rain, and splashes without issue.

The Razr 5G is powered by a Qualcomm Snapdragon 765G chipset along with 8GB of RAM, for a nice bump above its Snapdragon 710-powered predecessor. There’s 256GB of storage, though some of that is used for the OS.

The battery also gets a slight bump up to 2,800mAh compared with the 2,500mAh original. Motorola says you should be able to get a day of power between charges. When you run low on battery, a 15W Turbo Power

adapter is included in the box, though the phone doesn't support wireless charging.

The camera looks to be a significant improvement over the 16MP original. It comes in at 48MP, with an f/1.7 aperture and laser auto focus. It also supports 4x pixel binning for sharper 12MP photos.

5G is a given, but it’s not the same multi-band 5G as you’ll find on the Samsung Galaxy Z Fold 2. Instead, Motorola went with global sub-6GHz 5G. This won't please millimeter-wave-happy Verizon users, but the Razr 5G is a global phone and the majority of carriers globally are focused on sub-6GHz 5G rollouts before even considering millimeter-wave. (It's also worth noting that Verizon isn't selling the phone, though the unlocked model should work on its network.) And judging by the results in our Fastest Mobile Networks coverage, millimeter-wave won't have a major impact in the near future.

The phone also has eSIM support, Bluetooth 5.0, and NFC.

From the outer display, you can now quickly access the camera, use Google Assistant, and reply to notifications. You can also add your favorite apps, which will automatically expand to the main display if you unfold the phone.

Motorola promises at least two Android version upgrades, as well as bimonthly security updates for at least two years. And since Motorola is part of the Project Mainline and Project Treble programs, its software team can quickly push out updates based on user feedback and/or security threats.

The Razr 5G will sell directly for $1,399.99 unlocked, as well as through AT&T and T-Mobile. Motorola has yet to announce exact availability details, which will likely vary by region. We'll be taking a closer look at the phone in the near future, so check back soon for a full review.