The Wyze Smart Home Starter Bundle is just $49.99 at Home Depot. That's a crazy low price. Consider that the Wyze cam included in this bundle sells for around $26 on its own normally, that's half the cost in just one product. The bundle is going for $90 or more at other retailers, and it's currently as high as $98 on Amazon. Today's price drop is $30 better than previous deals we've shared. 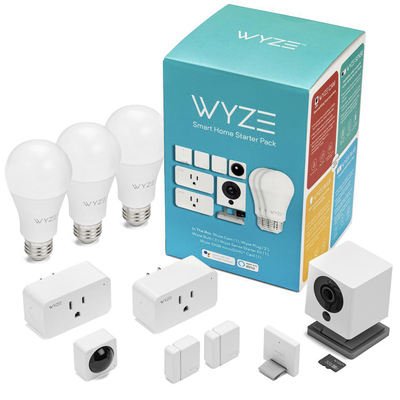 The package comes with a Wyze camera, two smart plugs, three smart bulbs, two contact sensors, a motion sensor, and an SD card. Use the free Wyze app on your phone to keep an eye on all of these devices from anywhere.

If you're still holding out on getting into a smart home ecosystem either because you're not sure what to get or just don't want to pay for how much the expensive stuff costs, this starter bundle is perfect. It has everything you need to kick off your smart home the right way. And the system is compatible with a wide range of other platforms, so you can keep expanding after starting here.

The bundle includes the 1080p HD indoor Wyze Cam. It's mountable and stackable and fits just about anywhere. The camera on its own costs around $26, so it's definitely the star of this show. It comes with night vision, two-way audio, and the ability to be controlled by your voice via Amazon Alexa or Google Assistant. The Class 10 SD card included in this deal will give you space to record everything that's going on.

The rest of the bundle includes two contact sensors and a motion sensor, which you can use to get instant alerts whenever the sensors are tripped. You'll also get three white smart bulbs that can connect to your smart home ecosystem and be controlled by your voice. Dim them or turn them on or off with a simple command. You can even set schedules and routines so they're on when you want them. Got other appliances you wish had some smarts? Use the two Wyze smart plugs in this starter kit to add some smarts there.

Just download the Wyze app to control all of these devices in one place.