It seems like Meizu is pretty generous with information surrounding the upcoming Meizu 17-series lately as the company shares two more teasers. One claims that the Pro version would have a 129-degree ultra-wide camera and the other one is all about the great-sounding stereo loudspeakers.

If the translation and the teaser itself is accurate, this could mean that the Meizu 17 Pro would sport one of the widest ultra-wide cameras on the market, if not the widest. Additionally, the lens will be paired with a 32MP sensor and we assume it does 4-to-1 pixel-binning. 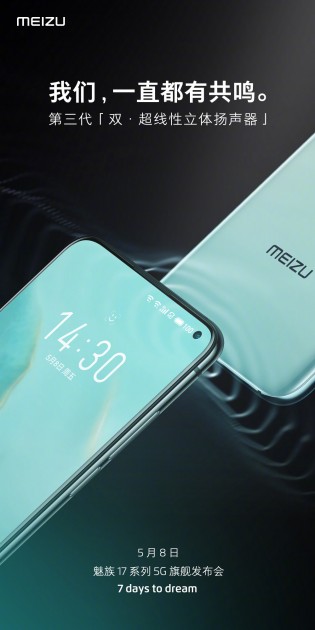 The second and most recent teaser says that the Meizu 17 – probably the 17 Pro as well – will boast third-generation "dual ultra-linear stereo speakers". Those of you who are familiar with audio tech, you'd probably know that this means maximum output with minimal distortion. In most cases, that is. Then again, we could have been easily lost in translation and Meizu was referring to something else entirely.

In any case, the flagship duo is expected to arrive on May 8, so we still have about a week to go before we learn more about the speakers and the ultra-wide camera.