Mediatek is introducing chipset after chipset for the growing 5G market. After we saw the Dimensity 800 and Dimensity 1000 back in January, a more powerful follow-up called Dimensity 1000+ was recently unveiled with the vivo iQOO Z1.

Today, the Weibo profile of the company teased another 5G chipset, and it might be a Dimensity 800+ with a mightier GPU and improved features for gaming. 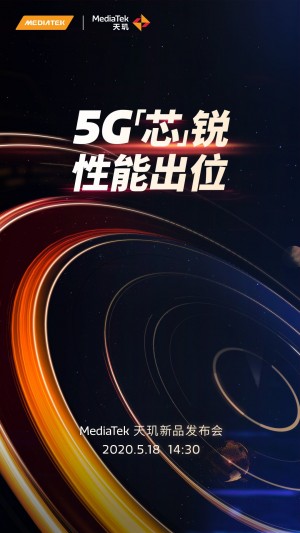 The poster doesn’t reveal anything in particular, so we’re left to play the guessing game. Honor will have an event on May 18, but it is later during the day, so an Honor smartphone with a Dimensity 800+ chip seems unlikely, especially when Huawei already has its own chipset division.

on the market when it launches. And with a midrange platform like the Dimensity 800+, it could go below the CNY2,000 ($280) threshold.

We’ll have to wait four more days until the event, but you are free to share in the comments what do you think Mediatek has in store for us.