LG Doubles Down on Dual Screens With the V60 ThinQ 5G

The V60 ThinQ 5G is LG's most attractive phone in years, but does it have what it takes to outshine the Samsung Galaxy S20? 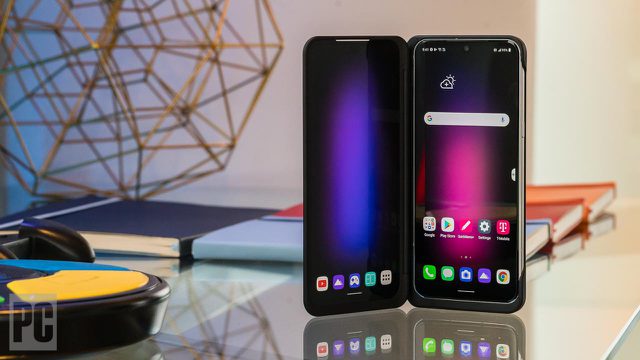 It's no secret that LG's smartphone division has long played second (or even third) fiddle to rivals like Apple and Samsung. Its latest flagship, the V60 ThinQ 5G, breathes new life into the tired V series with a notable facelift and an optional second screen, among other improvements. Whether that's enough for LG to regain its footing in the flagship phone market remains to be seen, especially with strong competition out there in the form of the new Samsung Galaxy S20 lineup. We got our hands on the V60 for a little while and have some first impressions.

The V series gets a welcome design update with the V60. The generic glass sandwich of years past has been replaced with something a bit more bold, available in blue with a contrasting silver aluminum frame or in white with a gold frame. No matter the color, the phone measures 6.67 by 3.06 by 0.35 inches (HWD) and weighs 6.77 ounces.

The front is dominated by a 6.8-inch OLED display with 2,460 by 1,080 resolution, tiny bezels, and a teardrop notch for the camera. The aspect ratio is 20.5:9 for a narrower-than-usual design, making the phone easier to hold with one hand. An optical fingerprint sensor is located at the bottom of the display.

SEE ALSO: Half of Us Snoop on Our Partners' Phones

On the back you'll find a horizontal camera stack at the top, which we'll touch on in a bit. The top edge of the phone holds a hybrid SIM slot, while the bottom is home to a speaker, a USB-C charging port, and a 3.5mm headphone jack. A volume rocker and Google Assistant button sit on the left side of the phone, and the power button is on the right.

Similar to what we saw with the LG G8X, the V60 works with an optional Second Display Case. Simply snap the V60 in the case and you have access to an additional 6.8-inch OLED display. You can move apps between displays, use one display as a dedicated keyboard, or even use the Wide View feature to extend apps across both displays.

While the list of apps that support stretching across multiple displays is still somewhat limited, it's growing. With the release of the V60, all of Google's consumer apps now support Wide View.

The V60 is powered by a Qualcomm Snapdragon 865 processor and 8GB of RAM. 128GB and 256GB storage options are available, and a microSD slot can accommodate up to an additional 2TB of storage.

The phone's 5,000mAh battery should be able to get you through an entire day. If you find yourself running low, the phone supports Quick Charge 4.0, so you can fill the battery up to 50 percent in just 30 minutes.

The V60 continues LG's tradition of a camera package that's good, but not remarkable. The rear camera stack sports two lenses and a time of flight (TOF) sensor for depth mapping. The primary lens comes in at 64MP with an f/1.8 aperture, and downsamples photos using a pixel binning method for 16MP images with more detail than you'd expect from a phone camera. There's also a wide-angle 13MP lens with an f/1.9 aperture. The front-facing camera clocks in at 10MP with an f/1.9 aperture.

In terms of software, you'll notice some significant improvements in the form of 8K video recording, a 3D photo effect that's similar to the 3D images you see on Facebook, and a new time-lapse control that condenses an hour of video into a minute. There's also a 2x-to-10x crop zoom, and improvements to night mode, both of which worked quite well in our limited hands-on period.

LG has long been a leader when it comes to smartphone audio, and the V60 is no exception. It's one of the few flagships left that still has a 3.5mm headphone jack and a high-quality DAC. The phone also features solid stereo speakers.

This year LG is adding a new feature called LG 3D surround Sound Engine Auto that can automatically adjust audio for voice, movies, and music. There's also no shortage of tweaks that can be made in the Settings menu to customize your audio experience.

The phone also sports four microphones on the top, left, bottom, and back. In addition to improving voice recognition for services like Google Assistant, the microphones also support a new feature called Voice OutFocus, which recognizes the location of voices when taking video and cancels out background noise.

While the V60 has the latest Qualcomm Snapdragon X55 modem, it doesn't have multi-band support. Verizon's model will only support millimeter-wave, while other US carrier models will be limited to sub-6GHz.

LG claims this decision is in order to make the phone more affordable, but it seems shortsighted. No matter which carrier you go with, you'll only have access to part of its available 5G spectrum.

The V60 ThinQ 5G will be available online and through most US carriers at some point in March. It will be sold as a standalone handset, or bundled with the Second Display Case if you buy it directly from LG. If you purchase through a carrier, it might only be available as a bundle. LG hasn't provided pricing info yet, but says the V60 will be less expensive than the Galaxy S20.

We're looking forward to getting our hands on the phone for a longer period of time and seeing how it stacks up against the Galaxy S20 lineup. Check back soon for more availability information and a full review.