Apple and Samsung both make high-end phablets, but which big-screen phone is right for you? We compare specs for the iPhone 11 Pro Max, Galaxy Note20, and Galaxy S+ to help you decide. 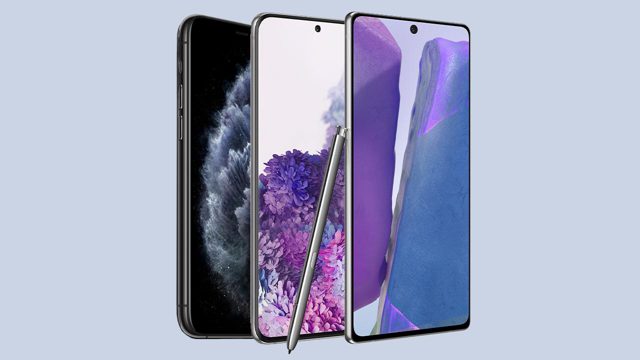 Samsung just announced its new Galaxy Note20 phablet, a 5G phone with a big 6.7-inch screen and an active stylus. It joins the Galaxy S20 line as one of Samsung's 5G-capable handsets, and it compares directly with the Galaxy S20+ in terms of design, features, and power. Apple hasn't dipped its toes in the 5G waters yet, but it still has its own flagship phablet in the form of the iPhone 11 Pro Max. Let's see how the three phones stack up against each other.

Apple and Samsung share very similar styles in their phone designs, with flat, slim profiles; friendly, rounded corners; and big, pronounced camera stacks on the back. All three phones are rated IP68, which means they're completely waterproof and can be submerged in four meters of water for up to 30 minutes. So they're all smooth, attractive slabs of glass and metal that can handle bad weather and the occasional dunking.

The S20+ also features another benefit the other phone screens lack: a 120Hz refresh rate. Its screen scrolls much more smoothly thanks to its higher refresh rate than the 60Hz iPhone and Note20 OLEDs. (It's worth noting the bigger Note20 Ultra's 6.7-inch screen features the same 3,200-by-1,440 resolution and 120Hz refresh rate as the S20+.)

All three phones are blazing fast, with the S20+ using Qualcomm's Snapdragon 865 processor and the Note20 using the step-up Snapdragon 865+ chip. The Note20 already has a bit more power than the S20+, but the lower-resolution screen should also work in its favor, likely improving frame rates for games even more. Of course, we'll have to test the phone ourselves before we can be sure. Meanwhile, Apple continues to go its own way with the company's A13 Bionic chip, which inches past Snapdragon 865 phones in benchmarks.

Cameras are king for flagship phones, and Apple and Samsung have been fighting each other to get to the top of the stack. Speaking of stacks, all three phones have stacks of multiple sensors and lenses on the backs, supporting zoom and wide-angle shots.

The S20+ and Note20 share nearly identical sets of rear-facing cameras, with 12MP f/2.2 120-degree ultra-wide-angle, 12MP f/1.8 79-degree wide-angle, and 64MP f/2.0 telephoto cameras. The Note20 seems to lack the DepthVision camera the S20+ has, which could mean slower focus or more limited AR features, but the main cameras are the same.

The iPhone 11 Pro Max also features a similar triple-camera setup with 12MP ultra-wide, wide, and telephoto lenses. Don't worry about the lower-resolution telephoto camera, as we were disappointed by the 64MP photo mode on the S20+.

For selfies, both Samsung phones feature 10MP front-facing sensors with f/2.2 lenses and 80-degree fields of view. The iPhone 11 Pro Max uses Apple's TrueDepth camera, which features a 12MP sensor and an f/2.2 lens. Face detection is supported by all three phones.

This is where Samsung is unequivocally ahead of Apple. As of the iPhone 11 series, Apple still has no 5G phones. Its 4G LTE performance is very strong, but if you want to use 5G, you're going to need to get an Android phone (at least until Apple inevitably announces a 5G phone). Meanwhile, the S20+ and Note20 support 5G in both sub-6 and mmWave formats. Band coverage hasn't yet been announced for the Note20 and will likely vary between carriers, but Samsung's phones definitely support 5G.

The Galaxy Note phones gets are aptly named because you can take notes on them. That's because they include Samsung's S Pen, an excellent active stylus that supports 4,096 different pressure levels and is handily as waterproof as the Note20 itself. Neither the S20+ nor the iPhone 11 Pro Max support active stylii, so if you need one, get a Note.

We still need to put the the Note20 through a full battery of tests to see how well it performs, but judging by the specs, the Galaxy S20+ stands out. Its screen eclipses the Note20's in sharpness and smoothness, which accounts for the higher price. Still, the Note20 features an active stylus, which note-takers and artists will appreciate, and they both share the same excellent camera stacks and similarly powerful processors. Meanwhile, the iPhone 11 Pro Max remains a compelling Apple equivalent, with similarly strong performance and a screen that sits between the two Samsung phones in crispness. The big questions are whether you want to be an Apple user or an Android user, and whether you want 5G.