Forget texting or emailing that file. With Nearby Share, Android users can quickly share photos, videos, and files to people within range with just a few taps. Here's how it works. 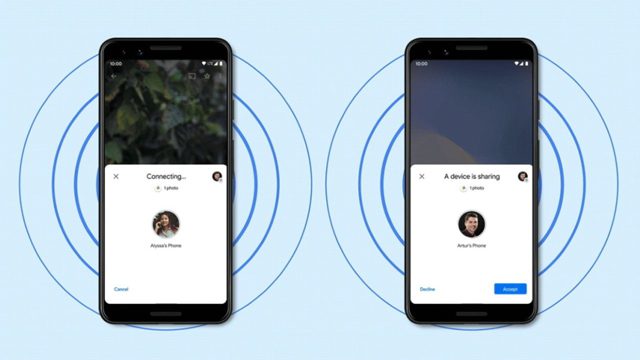 If you own an Android device, a new feature from Google called Nearby Share lets you send photos, videos, and files to fellow Android users. As long as the devices are within a certain range of each other, you can transfer any type of file. Plus, Nearby Share taps into different sharing methods, including Bluetooth, Bluetooth Low Energy, WebRTC, and peer-to-peer Wi-Fi.

Initially available for certain Pixel and Samsung devices, the feature is being rolled out to all devices running Android 6.0 or higher. A successor to the old Android Beam, Nearby Share is similar in concept to Apple’s AirDrop feature for iPhone and iPad.

To share files between two Android devices, both of them must be running Nearby Share with Bluetooth and location services turned on. You can tweak the feature to allow sharing with all your contacts or only certain people. After both devices see each other, and the recipient accepts the transfer, the file is automatically sent. Here’s how it works.

If you don’t have Nearby Share and don’t want to wait for it to be more widely available, compatible devices can get it via the beta version of Google Play Services. Browse to the web page for Google Play Services and click the button to Become a Tester.

Download and install the Google Play Services (Beta) app from Google Play on your device. Allow some time for the beta version to be activated, then go back to Settings > Google > Device connections. Tap the option for Nearby Share, then tap Turn on Nearby Share.

At the Nearby Share screen, tap the option for Device name if you wish to rename your phone or tablet to better identify it during a Nearby Share session.

In the name of security and privacy, you might want to keep your visibility hidden when in public and change it to All Contacts or Some Contacts when you specifically want to share a file.

Tap the option for Data usage to determine when you want to be able to share files. Select Data to use mobile data to transfer small files or set it to Wi-Fi only so mobile data will never be used. Choose Without Internet if you only want to share files while offline.

In order to use Nearby Share, first ensure that Bluetooth and Location are both enabled in the pull-down shade on your Android device. You can send a file using Nearby Share through any app that supports the built-in Android share feature. A few examples are the Files app, Gallery, and Google Photos, as well as certain third-party file services such as Microsoft OneDrive.

Any nearby device that has Nearby Share activated displays a notification prompting the user to make their device visible. After you tap the name of the device to which you want to share the file, the user of that device taps the Accept button. The file is then sent, received, and appears in the appropriate app.

If you wish to receive a file on your device, the process works the same, except you tap the notification for Device nearby is sharing to make your device visible. Another notification appears informing you that your device is visible to nearby devices. After the other person selects your device, tap the Accept button to accept the file.

In cases where you have multiple apps that can open a file, you will need to select the specific app you wish to use. For example, a PDF could be opened with a variety of apps, depending on which ones are installed. Select the app and decide whether you want to use this app to open the file type just once or always. The file then opens in your chosen app.

Should you run into any trouble with Nearby Sharing, Google has a few suggestions for troubleshooting.