How to Run Diagnostics on Your iPhone or Android Phone

Whether you're curious about a device you purchased or want to see how well a phone runs before you sell it, here are the best diagnostic tools for iPhone and Android.

Wondering if your smartphone is in good health? Maybe it's a used phone you just bought, or perhaps you're looking to sell an old device and want to make sure it's working correctly. Whatever the reason, you can put your phone through a series of diagnostic tests.

Certain Android devices have built-in diagnostic tools, but the App Store and Google Play Store offer third-party diagnostic tools, too. Apps like TestM, Phone Diagnostics, Phone Check (and Test), and Phone Doctor Plus can run a battery of tests to check the touch screen, audio, video, camera, microphone, sensors, and other components of your phone. Here's how they work. 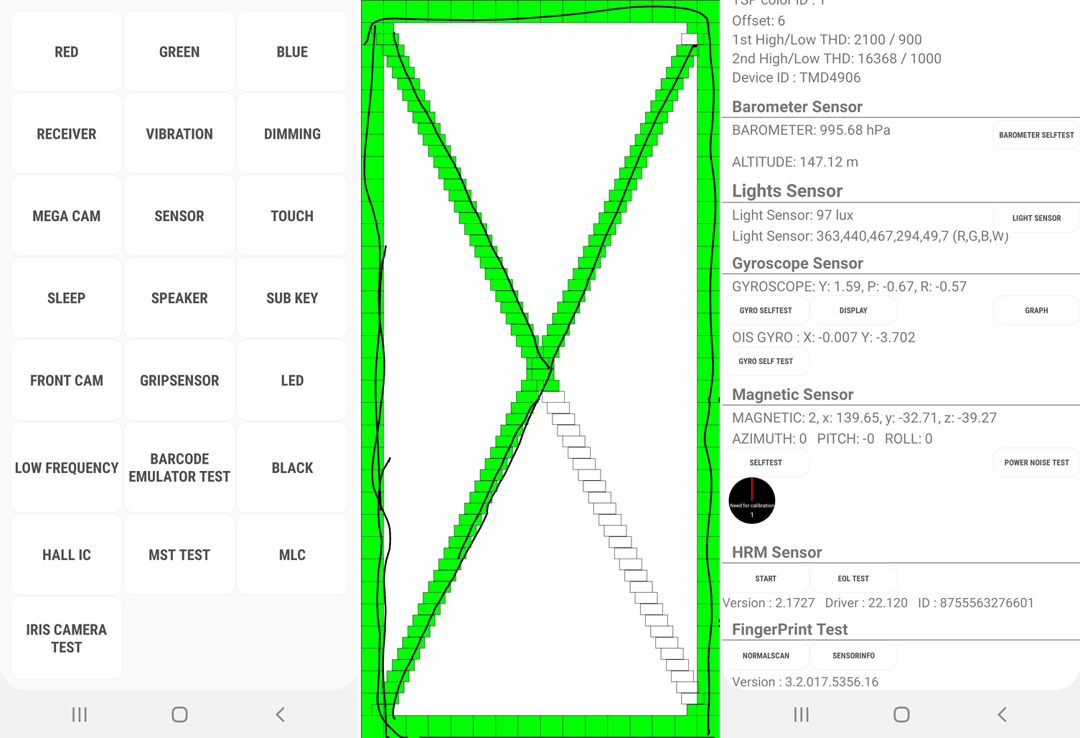 Samsung’s line of Galaxy smartphones have a built-in diagnostics tool once you punch in the right code. Launch the phone app and open the keypad. Tap the following keys: #0#. A diagnostic screen pops up with buttons for a variety of tests. Tapping the buttons for Red, Green, or Blue paints the screen in that color to make sure the pixels are working properly.

Tap Receiver to check the audio, Vibration to check the vibrating feature, or Sensor to test the accelerometer and other sensors. You can also tap Touch and then move your finger around the screen to test the touch screen, or tap Low Frequency to test low-frequency sounds. Tapping the screen after the test has run or tapping your phone's Back button returns you to the main screen.

Run Diagnostics on a Motorola Phone

On Motorola phones, launch the Phone app, open the keypad and tap the following keys: ##4636##. A testing screen appears with phone and Wi-Fi information, as well as a few tests you can run. Under Wi-Fi information, trigger a Ping test to make sure internet connectivity is working.

TestM for iPhone and Android

Designed for iOS and Android, the free TestM app can run diagnostics on your phone's touch screen, sound, camera, sensors, network connectivity, and other hardware.

The app gives you full control over the tests you want to run. Opt for a quick test to check three key features—touch screen, earpiece audio, and high-frequently audio—or commit to a full test to check out all supported features. Otherwise, you can test just one specific feature, like the accelerometer, Bluetooth connectivity, camera flash, and Face ID on an iPhone.

Most of the tests are interactive. The touch-screen test asks you to draw on the screen, the microphone test asks you to speak, the audio test prompts you to tap the numbers you hear, and the camera test requests that you pose for a picture.

After you've completed your testing, TestM compiles a report that reveals the key stats of your phone along with the outcome of the tests you ran. Each individual feature tested receives a green checkmark for good or a red checkmark for bad.

Any features that flunk can be re-tested from the report screen. You can share the report with someone else via email, messaging, or another app or service. TestM can even generate a list of local repair shops that might be able to fix whatever hardware ailment is affecting your phone.

Available for the iPhone, the Phone Diagnostics app offers a range of tests you can run one after the other. The app can check your touch screen, multi-touch capabilities, camera, flash, speaker, microphone, Wi-Fi, cellular access, sensors, and other components. Just tap the button for the test you wish to run. Alternatively, tap the Play button to run all the tests one after the other.

The multi-touch test asks you to place three fingers on the screen. The camera test snaps photos using the front and rear cameras, while the video record test shoots a quick video using the rear camera. The motion test asks you to move your phone around, and the GPS test verifies your location on a map.

The app doesn't generate any reports or results, but each successful test paints its button in green, while a failed or interrupted test appears in red. The app also attempts to steer you to a repair shop should your iPhone need to be fixed.

Phone Check (and Test) for Android

Designed for Android, Phone Check (and Test) lets you trigger a comprehensive series of diagnostics on your device. The app starts with an overview to explain how it works, how to run its various tests, and what each test encompasses.

A monitor screen shows you the current usage for memory, storage, battery, Wi-Fi, and cellular. To run the guided tests, select the features you want to include. The app can check your battery, network connectivity, audio, display, touch screen, GPS, camera, and sensors, among other features. Some of the tests run automatically, while others require your input.

After each test, you can tap OK if your phone passes or Not OK if something raises a red flag. You can also skip any test and move to the next one. A summary screen then displays the results of each test.

Phone Doctor Plus for Android

Another diagnostics tool geared for Android, Phone Doctor Plus serves up a host of tests. The app starts by showing snapshots of your current battery usage, storage capacity, CPU and memory usage, and network performance. Tap a specific snapshot to see more details. You can then turn to the actual tests.

Phone Doctor Plus breaks down its diagnostics into such categories as outer hardware, inner hardware, sensors, and wireless. Within each category are the specific features and components you can test, such as the touch screen, display, audio, camera, call function, CPU, memory, GPS, cellular, and Bluetooth.

Just tap a button to run the test and follow the directions. A successful test displays a green checkmark, while a failing one is dinged with a red X. You can also see a list of running apps and check your battery's current charge.

How to Check Your iPhone's Battery Health

For more, check out this built-in tool on iOS, which can help you monitor the health and capacity of your device's power source.