How to Block Robotexts and Spam Messages
Do Not Respond

How to Block Robotexts and Spam Messages

Robotexts and junk messages are a fact of life, but that doesn't mean you have to put up with them. Here's how to block spam text messages.

You hear the sound of an incoming text message and excitedly check your phone, thinking the message might be from a friend or family member. But no, this one is a robotext, a junk message sent to you by a spammer trying to con you into clicking on a link, opening an attachment, calling a number, or doing something else that's likely to cause you trouble.

Robotexts and spam messages are a fact of life, just like robocalls and junk email. But that doesn't mean you have to put up with them. Just as with spam phone calls, you can block and stop robotexts with the right tricks and tools.

Since you can largely ignore them, robotexts may not be as invasive as robocalls, but that doesn't mean these types of texts are harmless. Depending on your mobile phone plan, you may get charged for incoming text messages, so there's already a financial burden. From there, things can get even more dangerous, if you're not careful.

Clicking on a link or attachment in a spam message could trigger malware that infects your phone. Plus, if you've ever responded to a spam message, even accidentally, your phone number was likely tagged as valid and may have been disseminated to other scammers, increasing your odds of getting more junk messages. So, how do you deal with robotexts and spam messages? There are a few ways. 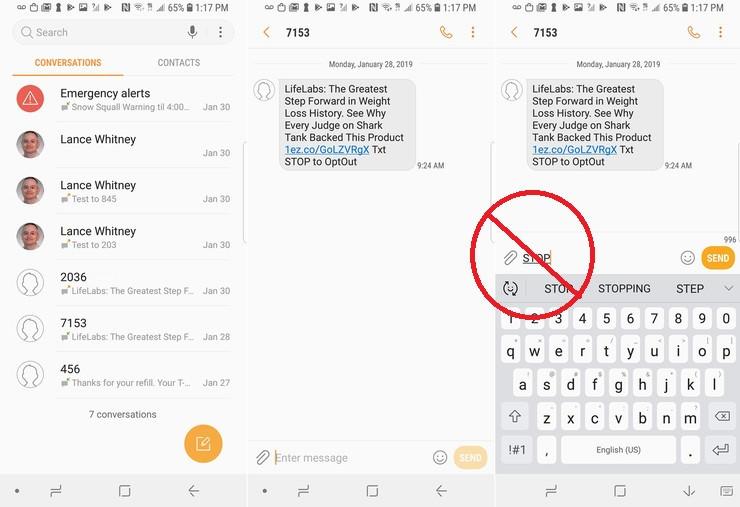 First, many legitimate robotexts include an option to text STOP to tell the company to remove you from their distribution list. However, that action usually just confirms to the scammer that you exist and that your phone number is valid. So unless you know the text came from a legitimate company that honors such requests, you're better off not responding to the message at all.

You can block a number that's been sending you junk messages. The drawback with this approach is that spammers typically spoof or switch phone numbers. So even if you block the number, you can still receive messages from the same spammer using a different number.

You can report a robotext to your mobile carrier by forwarding it to a specific number. To do this, copy the original message and text it to 7726 (which spells out SPAM). This works for AT&T, Verizon Wireless, T-Mobile, and Sprint, all of whom will use the information to try to block future spam messages.

Filter Out Spammers on Android

On an Android phone, you can disable all potential spam messages from the Messages app. Tap the three-dot icon in the upper right of the app and select Settings > Spam protection and turn on the Enable spam protection switch. Your phone will now alert you if an incoming message is suspected of being spam.

Filter Out Spammers Through Mobile Carriers

The top US mobile carriers offer their own filtering and blocking tools for subscribers. For the most part, they're geared more toward spam phone calls but they can also block numbers that attempt to deliver spam text messages.

Verizon’s Call Filter blocks robocalls and spam messages. The basic version is free, while the Plus version costs $2.99 for a single line or $7.99 a month for three or more lines. T-Mobile offers Scam ID and Scam Block, two features included with a standard plan. Another option called Name ID provides more advanced protection for $4 a month.

The carriers also have technology on the back end to identify and block spam messages in much the same way email providers try to stop spam email messages. If you need more robust robotext filtering, you may want to check out a third-party app.

Available for iOS and Android, Nomorobo costs $1.99 a month or $19.99 a year, though you can try it for free for two weeks. In addition to blocking suspected spam phone calls, Nomorobo can filter spam text messages. With iOS 11, Apple introduced an SMS-filtering feature that third-party apps can use to block spam texts, and Nomorobo takes advantage of that.

After installing Nomorobo on your iPhone, open Settings > Messages > Unknown & Spam. In the section for SMS Filtering, turn on the switch for Nomorobo. The app will now take over to block potential spam text messages and display their source.

Open the Messages app and you'll see your texts are now organized into two tabs: iMessage & SMS and SMS Junk. You won't be notified of any messages placed in the junk section, though you can peruse it to see which texts are marked as junk.

When you receive an SMS message, your iPhone shares the sender's phone number or email address and the contents of the message with Nomorobo. That step helps Nomorobo analyze such messages to better learn how to block potential new spammers based on message content.

On an Android phone, you need to set Nomorobo as your default phone app. You then confirm your phone number through a verification text and choose how you want robocalls and robotexts to be identified.

Designed for iOS and Android, RoboKiller costs $3.99 a month or $29.99 a year. The app looks at each message to analyze the phone number, message content, attachments, and other elements to determine if the text is legitimate or not.

After installing RoboKiller on an iPhone, open Settings > Messages > Unknown & Spam. In the section for SMS Filtering, turn on the switch for RoboKiller. If a message is deemed to be spam, RoboKiller moves it to the SMS Junk folder in the Messages app where you can review it.