A promo image of the Honor 30S surfaced yesterday which revealed the smartphone will come with a 64MP main camera and 3x optical zoom. Well, Honor has released a poster of the 30S confirming those bits as well as the phone's design.

The Honor 30S will sport an L-shaped quad camera on the back and will have at least two color options – Green and Blue-Purple gradient. We've seen the phone in an Orange hue as well, but the arrangement of the cameras in that render doesn't match the official design, meaning it could be fake or that's a different smartphone. 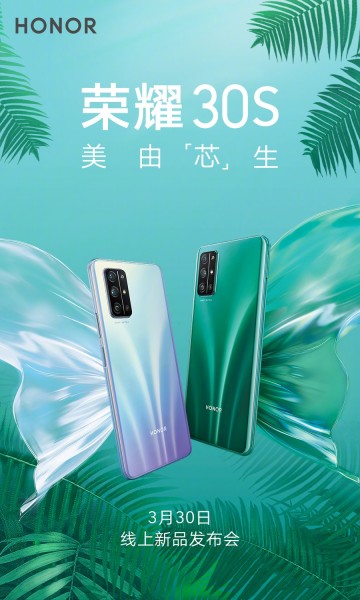 Other details we can glean from the poster are the side-mounted fingerprint reader joined by a volume rocker on the right side of the phone, and the SIM card slot that's placed on the left.

A live image of the Honor 30S has also surfaced, which shows off the phone in the Blue-Purple gradient, but doesn't reveal anything new.

Honor previously confirmed that 30S will pack the Kirin 820 SoC and support 5G networks, and we may see the company reveal more features about the smartphone before it's unveiled on March 30.