The task seemed simple. Sort the box room out and make it into a place where my son could do his gaming and his homework. The requirements seemed easy enough, but doing it “without any cables showing” and a minimalistic finish ? Well, that was a bit of a challenge.

That was back in October last year and the end-goal was to get “something” like this, just without the trunking up the wall and less clutter. 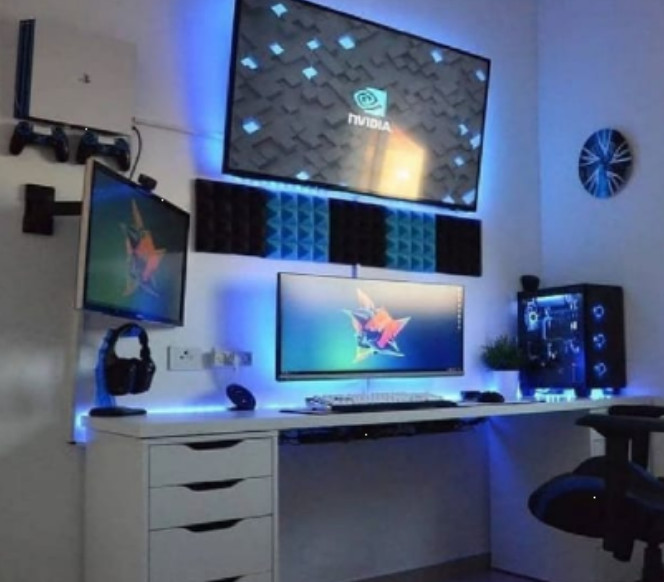 “Sure”, I thought, “just needs some cables in the wall, a desk and a bit of paint”. Well, it wasn’t quite that easy. Read how we got here with Part 1, Part 2, Part 3, Part 4 and Part 5 ! Here, though, is how the final setup looks. I have to say, I’m pretty impressed with myself.. 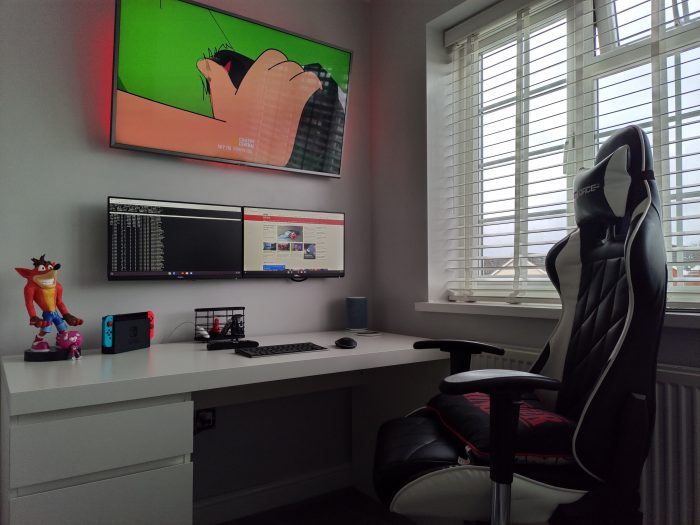 Wait! Before I give you the full guided tour, I’d got almost everything ready on the last update

but I needed to wait until pay day for a couple of monitor screens. I’d been looking around for monitors for a while and eventually realised that the ones I use at work were pretty cool, so I bought two of those. They’re 22″ Dell screens and I’d chosen to mount them on monitor arms so that they could be pulled out. This again proved to be a right royal pain in the butt. 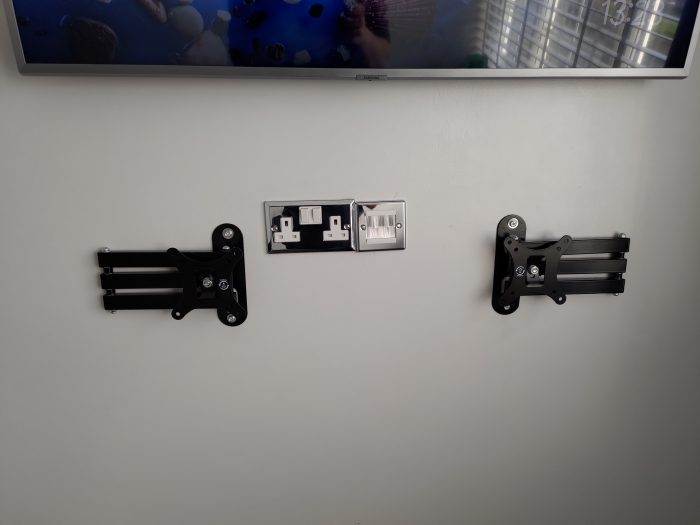 Before that, I needed to check that my additional HDMI leads were working. This, because in my stupidity, I’d not properly checked the HDMI cables whilst burying them in the wall. Fail.

That wall, by the way, is brick, so hanging a TV and two monitors off it isn’t a problems but getting cables into it…. is. 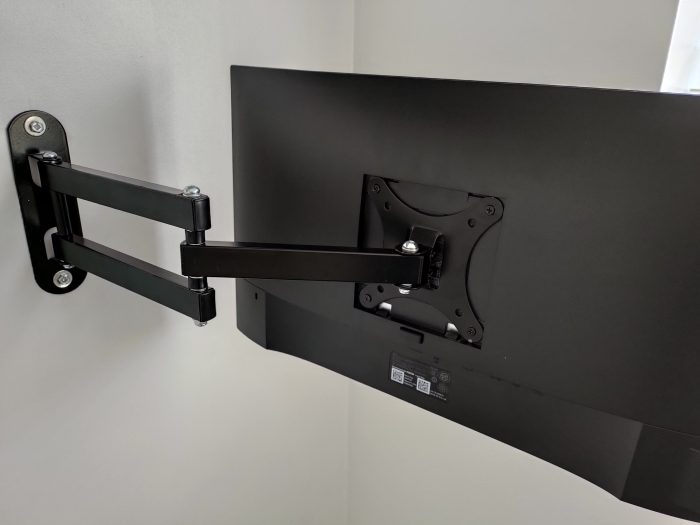 Luckily the HDMI cables tested fine so I went ahead and started adding those monitor brackets.

I’d taken the cheap route and bought two extendable “arms” for the monitors. It’s tricky to make the two monitors “meet” when they’re flat against the wall. You have to do a lot of measuring, re-measuring and then mathematics to ensure that the monitors will be central, horizontal and will meet together when they’re folded up. I nearly lost my shizzle when I pushed them against the wall to find that – despite my efforts – they didn’t meet properly and there was a 2cm gap between them.

This, I found out after having a think, was due to me folding one of the arms in incorrectly – a bit like folding a map the wrong way. Once I’d flapped the arm in right, it was perfect.

Those arms use VESA mounts, so make sure you’ve got the right one for your monitor. Again, measure and double-check. Cabling mess due to the power leads being too long.

My next task was to plug the things in, and this is where I hit a snag. The standard power leads are pretty long, so when you want the monitor up against the wall there’s a significant amount of bulk behind the screens.

To rectify this, I extended each arm, measured the amount of cable needed, then chopped down the power leads to a more suitable length. As the supplied power cables used moulded plugs, I had to get some old-school plugs from Screwfix and re-wire the chopped cable. 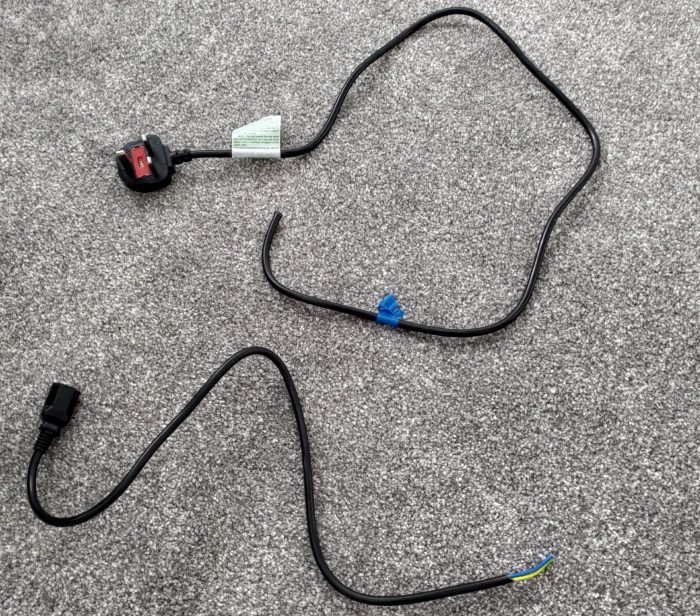 My lengthy cable cut in half. The bottom bit is now ready for a new plug.

If there’s one skill eveyone should have, it’s how to wire a plug. In the UK, with the plug open and the pins down, it’s blue (neutural) to the left, brown (live) to the right (fuse) and earth (yellow / green) to the top. Screw it all tight and you’re good to go.

So then, plug the monitors back in, hope there’s no explosion, turn on. 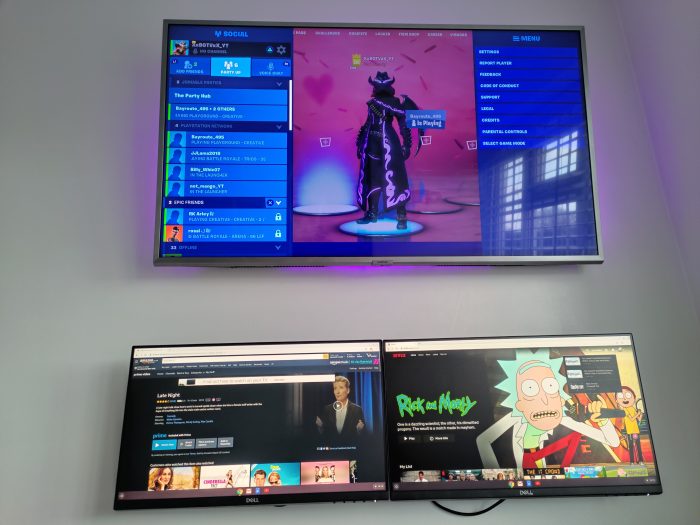 It’s done. Well… ish. I still needed to tuck the cables in a little (there’s one hanging below in the shot above), but you can see that things are pretty much completed now, so it’s time for one of those funky “Gaming Rig” videos of the completed room! I think I went through pretty much everything, but we have GTForce Pro GT gaming chair, an Amazon Echo, and an Ikea Malm desk (you can have the drawers on either side). Powering those two monitors is an Asus CN60 Chromebox from eBay, and the two HDMI outputs from that are fed into a couple of Dell P2219H monitors.

The main screen up top is a Samsung UE43RU747 LED HDR TV. That has two HDMI feeds going into it. One from a PS4 and one from the Nintendo Switch

. The TV does Bluetooth and has a clever WiFi remote that works with the Alexa (Amazon Echo) speaker so you can turn the screen on and off by voice.

The LED lights behind the TV are £12.99 from eBay and connect to the Amazon Echo by voice etc. The LED lights in the ceiling are dirt-cheap and available from TomTop. Likewise, they hook into your Alexa. If there’s one thing I learned here it’s not to buy the expesive Philips bulbs or the strip LED’s from Ikea – you can just get on eBay or Amazon and get far cheaper ones that do exactly the same thing.

A big job this one. If you want to pick up on any of the posts I’ve added, head below! 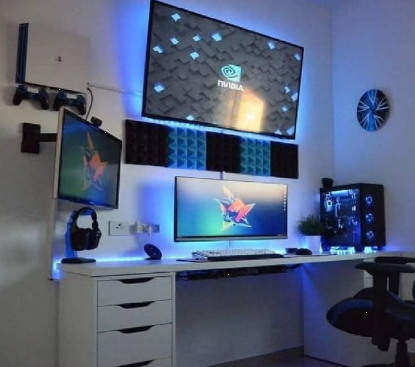 Let me tell you a story. My son has long wanted a “gaming room”. We’ve pushed back on this but, now he’s at high school, we’ve started to convert our I’m probably talking to a fairly small subset of people here, but if you have an ultra-fast broadband connection this is for you. With rapid 5G home 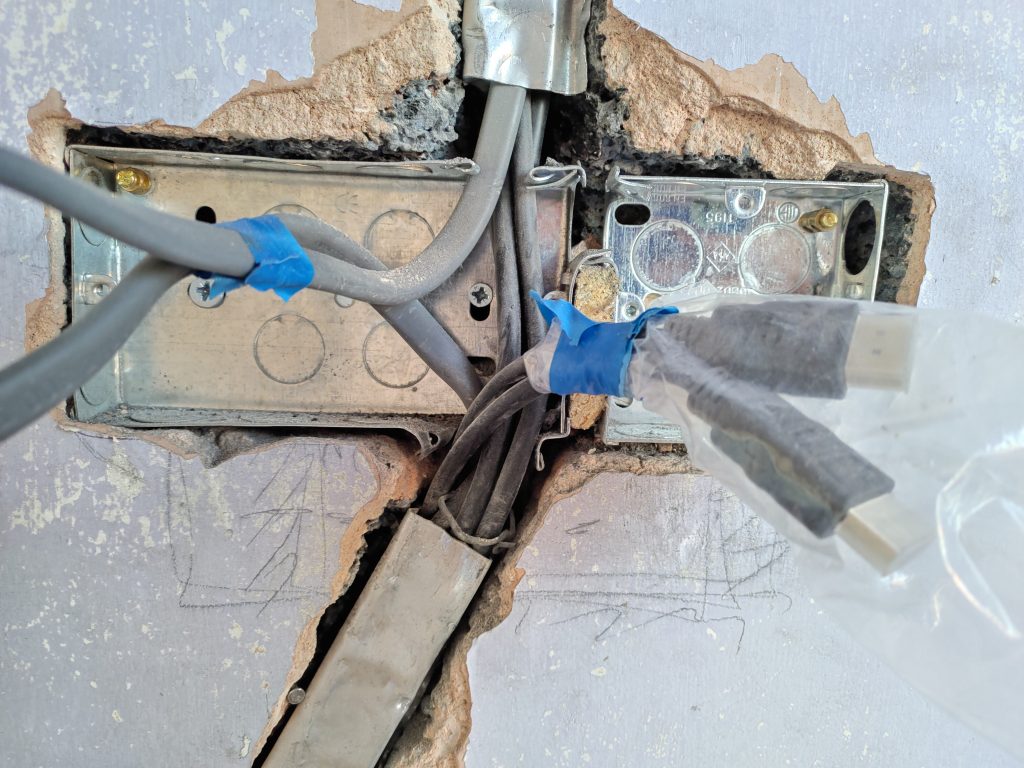 A little update on my weekend adventures then, and we’re now at the plastering stage. For those of you who haven’t caught up, check the previous updates 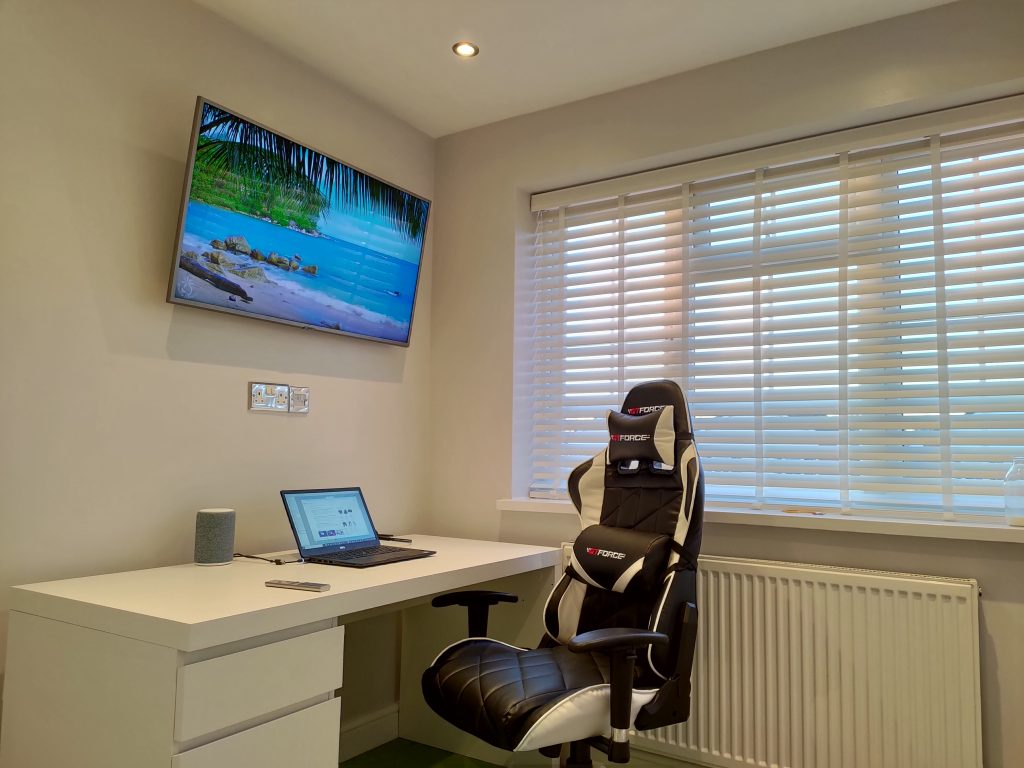 It’s hard to believe that part one of this project was back in October, but hey – life gets in the way and other things have had to take priority. Our aim 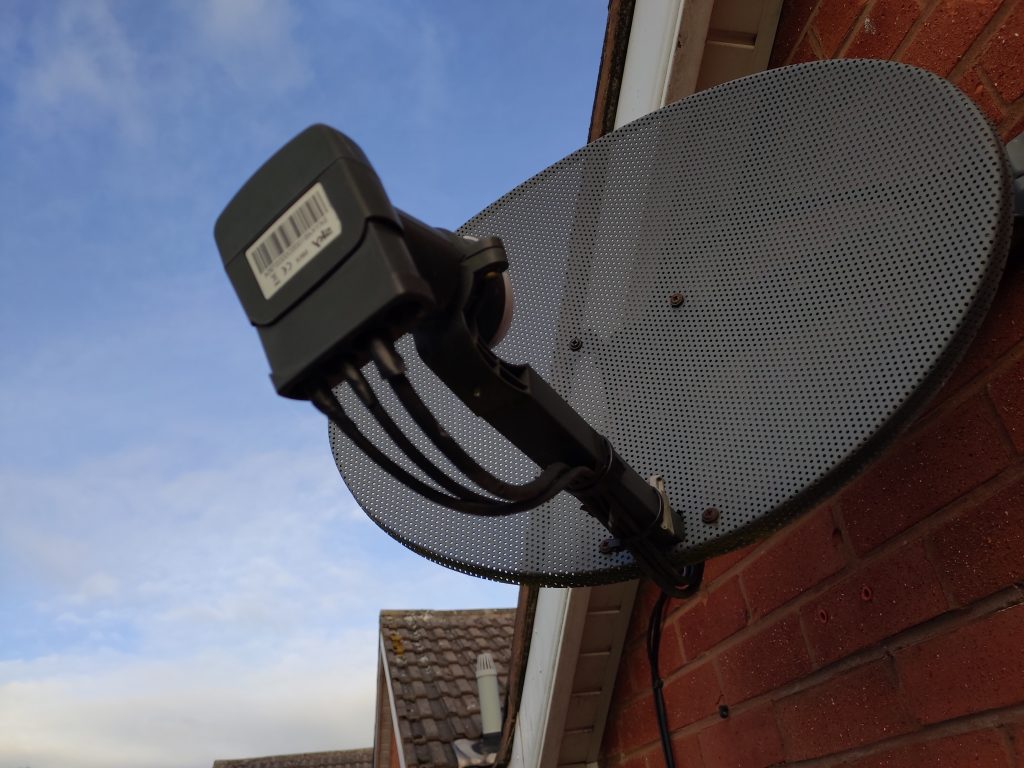 This project has been rumbling on for months now. You can read all about the various stages either below or get the story in our review section.