Amazon held a small, invite-only virtual event earlier today where it announced several new devices, including the 4th generation of the Echo Dot smart speaker and two new iterations of the Amazon Fire TV Stick. Without delay, the items are already available to pre-order and there's even a way you can save on the purchase right now. The all-new Echo Dot speaker comes in at $49.99, matching the price of the previous model. However, adding two to your cart and entering promo code DOT2PACK during checkout will save you $20 on the price for a limited time. That's like snagging each one for just $40 apiece.

You can also snag this deal on the new Echo Dot with Clock or the Kids Edition using the same promo code to drop the total price to $100 for two. While we haven't seen a deal on the new models of the Fire TV Stick just yet, we'll be sure to let you know once we do. 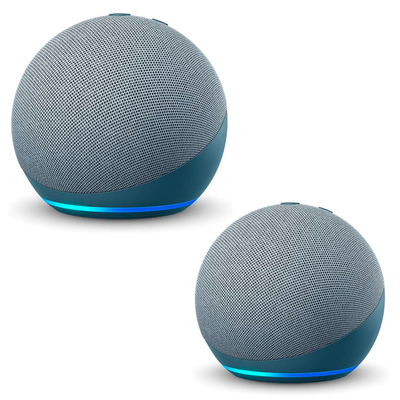 Amazon announced the all-new Echo Dot (4th Generation) smart speaker earlier today, and there's already a way you can save on it! Add two to your cart and remember to use the following promo code at checkout to save $20 on your order.

Along with improvements to its sound quality, the all-new Echo Dot has a much different form factor than the previous, 3rd-generation Echo Dot as well; it's now a spherical, ball-like speaker that has a flat bottom to easily sit on your desk or wherever it's placed. Of course, it includes Alexa for voice control, too. Alexa can play music, answer questions, tell you the latest news, and control compatible smart home devices when you ask. The Echo Dot isn't limited to playing music from Amazon Music either; you can connect it to Apple Music, Spotify, SiriusXM, and other popular music streaming services so you can listen to your library wherever you're subscribed.

This model of the Echo Dot is designed with multiple layers of privacy protections and controls, including the handy microphone off button that electronically disconnects the microphone. It's available in three colors, and there's also an Echo Dot with Clock model that's available to pre-order now as well. The clock model is nearly the same though it has a built-in LED display that makes a great clock for your nightstand.

Meanwhile, the new Echo Dot Kids Edition doesn't feature a built-in LED clock, though it does come in two kid-friendly styles and can help your kids learn with everything Alexa knows. There is a version of Alexa for kids to ensure they're not learning anything they shouldn't, and parents also receive a free year's membership to Amazon Kids+ with the purchase which is invaluable now that more children are at home for the school year.

Amazon didn't forget about the full-size Echo smart speaker either. It received a refresh as well, and its latest version is now priced at $99.99. You can save $30 on two when you use promo code ECHO2PK during checkout.

Amazon offers free shipping on orders totaling $25 or more, though you could receive your order even faster with an Amazon Prime membership. If you've never been a Prime member before, you can start a free 30-day trial to score free two-day shipping with no order minimum. That will also get you ready for Prime Day which is likely to occur mid-October.

Green phones are having a moment.

Alexa is most commonly used for controlling smart home gadgets, answering questions, and playing music, but it can also be used for fun with compatible toys.