might be taking over your timelines right now with some awesome Amazon device deals, the best Echo deal doesn't even come from Amazon. The deal that beats them all actually comes from SiriusXM where you can snag a pair of Echo Dot speakers for just $15.

All you have to do to get two Echo Dot smart speakers there for $15 is sign up for three months of Premier streaming. Given that Premier streaming alone would regularly cost $39 for that period of time, this is a great deal. When you factor in that the 3rd-gen Echo Dot goes for $40 these days, you're saving over $100 with this promotion. Even when you consider the Echo Dot's current discounted price, this is a stellar deal but you have to act fast to get in on it. 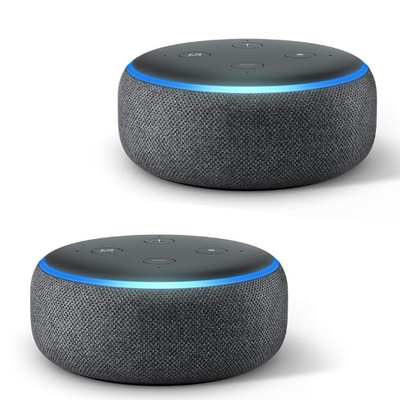 SiriusXM is letting you listen for the next three months for just $15 when you sign up for a Premier streaming subscription and is throwing in a code to redeem for an Echo Dot. The best part is, that code can get you TWO Echo Dots currently.

So, here's how this deal works. Head to SiriusXM's site and follow the instructions to pay your $15. You'll then get three months of SiriusXM Premier streaming. Your account is set to auto-renew, but you can cancel at any time without a penalty.

Once you're signed up, you'll receive an email with a code that can be redeemed at Amazon against the price of an Echo Dot. Because of the Echo Dot's current discounted price of $18.99, that code can actually be used to score two Echo Dots. You don't have much longer to snag this deal, though, as the value of that code is $40 and the Echo Dot will rise back up to that price tonight when Prime Day ends.

The code can take an hour or so to come through, so the sooner you sign up at SiriusXM the better.