In the battle of 4G, 5G, and Wi-Fi, LoraWAN is a dark horse. Helium thinks it can make a super-cheap network for the Internet of Things, and it has its first consumer endpoint. 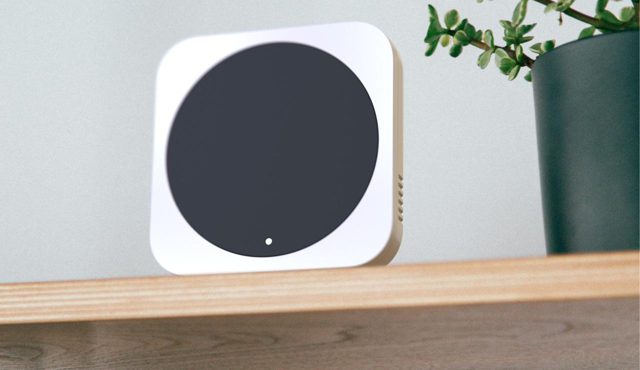 The Internet of Things isn't like the internet you access on your phone or laptop. It's much quieter—little bursts of low-bandwidth chatter knitting together temperature sensors, smart home gadgets, location trackers, and the like.

For years, I've been hearing wireless carriers trying to hit the IoT market with new networks designed for these devices. Technologies like NB-IOT and LTE-M haven't done so well because of cost and battery requirements. AT&T offers LTE-M and NB-IOT service for $12/year; prices are relatively similar from Choice IOT. T-Mobile says its network costs $6/year.

"None of the existing networks that we have today are really designed for this next wave of stuff," says Helium's CEO Amir Haleem. "Our view of how to solve that problem was to radically change how these networks are built, [for] devices that will pay a dollar a year."

Today the company is introducing Tabs, the first consumer device to run on Helium's network. Until now, the company mostly sold $349 hotspots to hobbyists interested in expanding the network, and then developers' kits or enterprise devices to corporate clients.

Tabs look a bit like a Jiobit or another location tracker. Their interface is pretty basic; there's a smartphone app you can use to track your Tags and see historical location data. They have a range of up to about 10 miles from a hotspot, and a battery life measured "in months," Haleem said. Tabs will cost $49 for Helium hotspot owners, he said.

Data usage on Helium's network is charged by the 24-byte packet, at a price that's equivalent to 2.4MB per $1. For very low data devices, that can come out to much less per year than the NB-IOT networks.

One of the company's most prominent customers is Conserv, a company that works with museums to make sure their art isn't damaged by environmental conditions. Conserv's Helium-powered automated sensors can last years on one battery charge, the companies said in a press release.

“Before the Helium Network, IoT devices like ours had no great way to connect to the internet,” said Austin Senseman, founder and CEO of Conserv. “We are delighted to partner with Helium to ensure that we are not just keeping historical art and artifacts safe and secure for future generations to come, but also protecting our community during this unprecedented time.”

Bikeshare company Lime tracks its bikes with Helium. You can also build your own Helium gadgets with Arduino and such; Helium is an open platform.

I'm not a fan of "blockchain" when it's used to sprinkle word magic on random products, but Helium has an actual use for the technology. The company uses a blockchain "like a router," to determine who owns a packet and what other hotspot it should be sent to, without the need for a central server with routing tables.

That's supposed to give customers additional faith in the Helium network, because it means that even if Helium goes out of business, the hotspots will still be able to operate and communicate. No packets go through Helium, and if Helium itself disappeared, the data traffuc wouldn't notice.

"We have built this shared public infrastructure that can be used privately," Haleem said. "No packets need to come to Helium or anywhere else. All the data can be routed directly to your own server."

And the Helium hotspot range is … crazy. Helium has a map of hotspot locations on its website, but it doesn't show the range from each location, so that map is less helpful than it might be. Haleem says that his hotspots—which are the size of a hardback book, mind you, with a normal router antenna sticking out of them—can get "several hundred square miles" per hotspot in rural areas, which is kind of crazy. (The network is not a mesh.)

How does he do it? Once again, this isn't your usual data network. It sounds like there's a ton of redundancy and error correction involved; "if you get a thousand bits per second, you're doing pretty well," Haleem said.

Helium is trying to create a nationwide network of hotspot owners.

I'm going to insert my own bias here—I think cryptocurrency is a scam. It's a purely speculative "investment" unbacked by any fundamentals, such as the faith and credit of a long-existing institution, or a large body of physical assets in a bank. It's insanely volatile to the extent where it's like playing craps at a casino. I do not generally write about crypto. But crypto is Helium's way of paying its users back for buying the hotspot, so I have to here.

Helium pays hotspot owners back by letting them collect HNT, a proprietary token with a current value of around 31 cents per token. According to Reddit's Helium subreddit, all hotspots share around 80,000 tokens daily, which means that as the number of hotspots goes up, the earnings per hotspot go down; one poster quotes a global average of 27.5 HNT ($8.50) per day right now. That means a hotspot could make back its $349 in 41 days. (Helium's official website estimates about 108,000 tokens are distributed daily.)

Unfortunately, I couldn't find an exchange willing to trade HNT out for anything that could be turned into dollars, although they can be used for "data credits" to pay for data transmissions on the network.

Crypto considerations aside, Helium's approach is fascinating from a social perspective. It's much more like the internet itself than like other wireless networks—decentralized, not relying on a single for-profit provider and able to work with commodity hardware. I'd love to see if it succeeds.