Half of Us Snoop on Our Partners' Phones

We're looking for evidence of cheating when we snoop—and more than half of us find it. 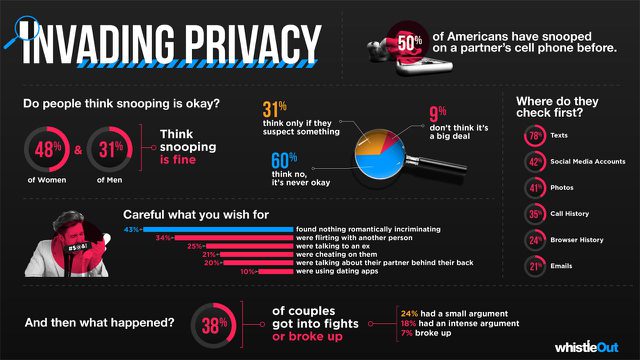 There's a fifty-fifty chance that you've taken a peek at your partner's phone. That's not me, that's a survey talking.

WhistleOut—which compares phone, TV, and internet provider plans—teamed up with market research agency Lux Insights to ask people how much they respect the privacy of their significant other. And while privacy is a major issue when phones track everything we do outside the home, it turns out things aren't much safer on the domestic front.

Not only have 50 percent of the survey's respondents said they've looked at a partner's phone, but 48 percent of women and 31 percent of men thought this was OK to do. There's usually a reason why people resort to this behavior—and that reason is that they suspect their partner is cheating. Less than half (43 percent) found out they had nothing to worry about in the first place. But others found flirty texts, evidence of talking to an ex, outright proof of cheating, actively used dating apps, and even some unkind words about themselves.

SEE ALSO: LG Doubles Down on Dual Screens With the V60 ThinQ 5G

But instead of this resulting in a 100 percent chance of a fight or breakup, only 38 percent of couples found themselves on that rocky path.