Right now you can get the 3-pack of the Google Wifi mesh networking system on sale for $174.98 on Amazon. This is a refreshed version of the Google Wifi system released several years ago, and it was just released back in late September at a much less expensive starting price. So you're getting even more value on it now since the original starting price was $200. It has only dropped this low once before.

If you don't need all three Wifi points or want to add to the system to cover even more space, the individual ones are on sale as well. Get one Google Wifi piece for $79.99, which is down from $100. 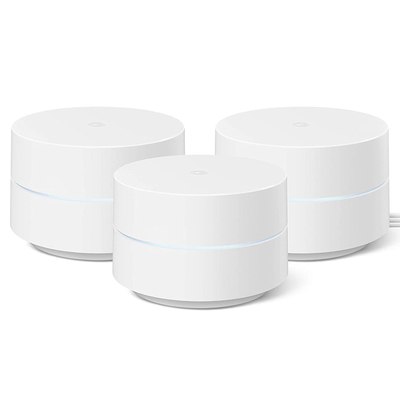 The system has been refreshed for 2020 and altogether cheaper than the previous version, especially with this sale. Cover up to 4,500 square feet in solid, dependable Wi-Fi. Set it up quickly and easily and get it working with your smart home.

Google Wifi is one of the simplest mesh networking systems around. It really does a lot of the work for you, and it's designed to be super easy to use. The three points work together to cover your whole home in a seamless blanket of Wi-Fi that won't require any manual switching from you once it's setup. You could be on a video call in one room and walk to another room covered by a different access point without having your call interrupted at all.

The 3-pack can cover up to 4,500 square feet. Plug the router into your modem and set the points up toward the end of the router's coverage to help extend the Wi-Fi and keep your connection fast and strong in every room. If you have a large home or find there are spots with a weak signal, you can expand the network with more points.

Once you have your Wifi system plugged in, just download the free app to get started. It will guide you in setting them up. You can also use the app later to create guest networks, share passwords, and prioritize certain devices that need faster speeds. It also has parental controls so you can set online time for your kids.