Costco has a GoPro Hero8 Black action camera bundle on sale for $269.99. That's a crazy price, but you will need a Costco login just to see the price and a membership to take advantage of it. Keep in mind that the Hero8 Black is on sale for the holidays, but most retailers like B&H have it for around $280. That means Costco's deal is actually $10 better than the Hero8 Black by itself even though it includes some very key essentials as well.

We did share a different Hero8 Black bundle from Best Buy last week. That bundle is still on sale for $300. It includes a couple of different accessories including a head mount and Shorty, which works as both a tripod and extension pole. That's also a really good price and may be worth the extra $30 if you like those accessories better. 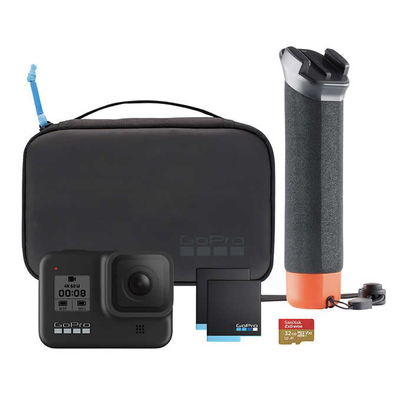 The bundle is actually less than the current price of the Hero8 Black by itself. Includes The Handler hand grip camera mount, a spare battery, a 32GB microSD card, and a compact carrying case. The Hero8 has 4K video and 12MP photos.

Costco's bundle includes The Handler, which is a hand grip camera mount, a spare battery so you can hot swap and stay charged while in the field, and a 32GB microSD card. It also comes with a compact case for carrying everything.

While the Hero8 has since been replaced by the Hero9 lineup, it is still a very capable device that offers great improvement over even older generations. More so than ever, the GoPro is designed to travel with you. It's a more pocketable design and has folding fingers at the base so you can easily swap mounts. The side door makes changing out the rechargeable battery that much faster, and the lens is twice as impact resistant. It can record videos in a max resolution of 4K with 60 fps and take 12MP still photos.

If you're using the GoPro the way it was meant to be used, you're probably running around or biking or doing something very active. That means image stabilization has to be a priority. The Hero8 uses HyperSmooth 2.0 to provide three levels of stabilization, including a boost that helps you get the smoothest video possible. The technology works at all resolutions and frame rates, and it features in-app horizon leveling as well.

Shoot time lapse that is super stabilized with TimeWarp 2.0. It can automatically adjust speed based on the motion, scene detection, and lighting. Slow it down in real time to focus on interesting moments and then speed it back up. Whether you're using photo or video, the camera has LiveBurst that records 1.5 seconds before and after every moment so you can find the perfect frame.