The COVID-19 pandemic pushed a lot of people into confinement in their own homes, leading to a surge in demand for home entertainment solutions. PC and laptop manufacturers recorded massive growth in sales and shipments in the past few months, and the tablet market surged as well.

According to a report by Canalys, the otherwise unimpressive tablet market

grew 26% on a yearly basis and all of the top five manufacturers recorded an increase in shipments as during Q2 2020.

Apple remains a runaway leader in the tablet market with more than double the shipments of its closest competitor, Samsung. According to Ben Stanton, Senior Analyst at Canalys, vendors, carriers, and retailers in mature markets (like the United States) offered massive discounts like 60 days of unlimited data for education-issued tablets, proper online deliveries and improving online sales. 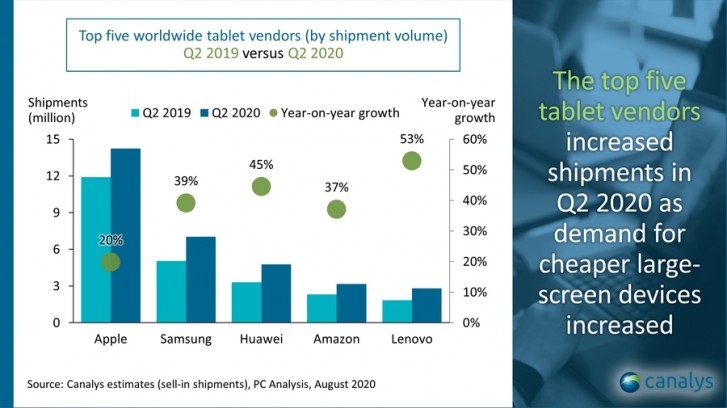 Ishan Dutt, also an analyst at Canalys, revealed that internal competition for communal screens at home was easily solved with purchasing more and more devices, especially when everyone needed one for education, remote work, and entertainment.

The lower than desktops and notebooks price also helped people decide for tablets, and detachable ones were among the most purchased solutions.