Have you setup your own network-attached storage device yet? It might seem daunting at first, but wouldn't you love some personal cloud storage at home that you and your family can access from basically any device on your network? The QNAP TS-431K-US 4-bay personal cloud NAS might be your ticket in, and right now it's on sale for $219 at Newegg when you use the code 2BFSTNW347 in your cart. You'll need a Newegg login to use the code. This is a limited-time sale that will only last through the weekend. The device normally sells for around $279 and you can find it going for that price at other retailers like Amazon

. That's actually its lowest price on Amazon since it was selling for as high as $319 before October. 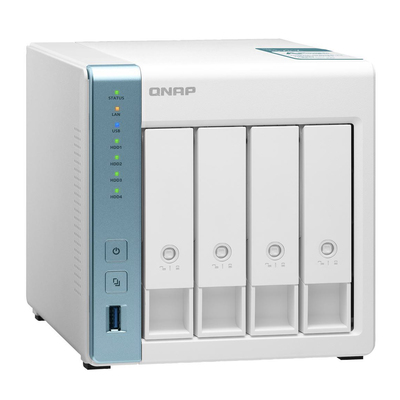 Powered by a quad-core 1.7GHz processor and 1GB DDR3 RAM. It has two GbE LAN ports and 3 USB 3.2 Gen 1 ports. Create personal cloud storage or a networked server for all your personal media. Can protect your data from drive failure.

This QNAP network-attached storage device is quite similar to a device we consider one of the best NAS for the home. The version on sale today is not quite as expensive, even when not on sale, and still maintains a lot of the same features. It's a very good device for setting up everything from personal cloud storage to a Plex server.

The QNAP TS-431K-US is a 4-bay storage device. It's powered by a 1.7GHz quad-core processor and 1GB DDR3 RAM. It has two Gigabit Ethernet LAN ports and three USB 3.2 Gen 1 ports. It also uses Snapshot technology so you can create reliable backups and recover your data in the event of any crash or accidental deletion.

The device is listed as diskless, which means while it has four bays to store drives in it doesn't actually come with any. You'll want really solid hard drives that can last for a long time. The WD Red drives are some of the best for accomplishing that. You could also look at Seagate's IronWolf lineup for drives built to take a beating.

If you need some other ideas for your home NAS, check out the best NAS deals and keep an eye out because Black Friday is going to be a great time to invest in one of these machines.