Arcades may be a relic of the past in 2020, but that doesn't mean arcade-style gaming is dead. Arcade1Up machines bring the fun of arcade games to your home with mini cabinet designs that are reminiscent of popular arcade cabinets yet in a smaller size that makes it possible for anyone to own one. Thanks to a limited-time sale at Walmart, the price on two of these machines is much lower than usual. While supplies last, you can pick one up for as low as $99.99 and save $100 off the regular price. Shipping is free. 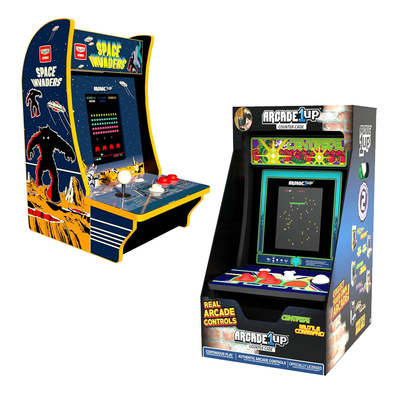 Select models of the Arcade1Up Countercade Arcade Machine are now on sale at Walmart to save you $100 on the purchase today! Choose between Space Invaders and Centipede models while supplies last. Shipping is free.

Two different models are on sale at Walmart today, and it's likely these prices won't last long at all. The first is this Space Invaders Arcade1Up Machine. At $100 off its normal cost, that marks one of the lowest prices we've ever seen on one of these machines. The second model, Centipede Arcade1Up Machine is on sale for the same price of $99.99.

Arcade1Up's Countercade machines measure 18 inches high and are best suited to be placed on a counter or table of some sort. Unlike the usual arcade machines we think of, these machines don't require a quarter to start playing. They feature original artwork from the games, along with full-color high resolution displays and speakers. There are full-size joysticks and control buttons as well, so you don't have to worry about playing with minature controls even though the machine is smaller than traditional models.

Walmart offers free shipping on orders of $35 or more.