The Elecrow CrowPi2 Raspberry Pi Laptop and STEM education platform is a Kickstarter crowd-funding project that lets you choose how much you want to invest, and you will be rewarded based on the amount you give. If it's just an interesting project to you and you don't necessarily want any reward, you can give as much as you can afford. But if you'd actually like to try out the CrowPi2 you will need to give at least around $170 (the rewards are in Hong Kong dollars, so HK$1,310). That will get you the CrowPi2 basic kit that includes the laptop, a TF card with the customized system, and several motors, connectors, and other components. It does not include the Raspberry Pi motherboard, though, and that'll cost at least around $240. You can back the project with even more to get even higher rewards, including two Deluxe Kits if you go above $619.

Pay what you want 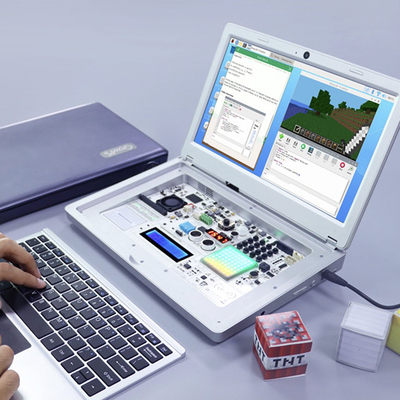 This Raspberry Pi laptop is a tool for learning Python, Scratch, AI, and Minecraft. You can also learn engineering with sensors, breadboards, lights, and more on the inside. Has independently developed software and 22 sensors and modules.

The CrowPi2 is a very interesting device that is dedicated to STEM learning both through coding and software and hardware and engineering. You can see the first version, the original CrowPi, for sale on Amazon for around $309. So the fact that you can get the full customized kit for the sequel for less than that in this Kickstarter campaign is some good value. It will probably be sold for much more when it's first released.

The CrowPi2 works as a portable laptop, but its primary focus is STEM education. You can learn programming languages like Python, Scratch, and learn about programming AI or even Minecraft all in a super easy way. The software is independently developed specifically for this machine. It also includes 22 kinds of common sensors and modules built in. All you do is remove the keyboard and you get access to all kinds of sensors, including a breadboard for making your own light-up circuits.

The laptop specifications include an 11.6-inch IPS screen with 1080p resolution, the Raspberry Pi 4B (Raspberry's latest model), and a removable wireless keyboard. So even if you take the keyboard off to play with the modules underneath, you can still type on the computer. It also has a 2MP camera, a built-in microphone, stereo output speakers, and more.

This is a great option for kids, teens, and adults. It'll work whether you're a beginner just learning things for the first time or an expert trying to sharpen your skills. There's more than 96 course resources and over 20 projects, including games, to choose from.

Have a Pixel 2? These are the best wireless headphones for it

The Pixel 2 is still a solid Android phone here in 2020. Shopping for some headphones to go along with it? These are out top picks!