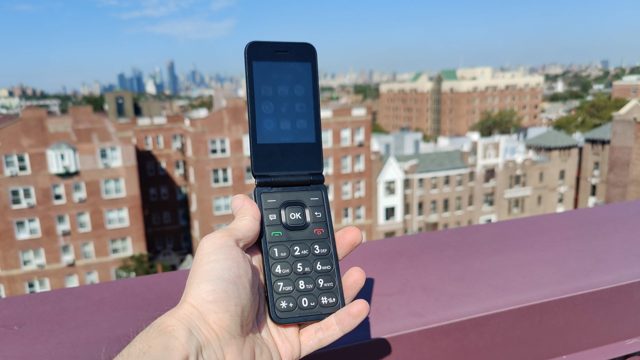 4G-compatible voice phones are becoming one of those frustratingly underserved markets, like wireless hotspots, where there just aren't a lot of options. Unlike with 2G and 3G devices, every 4G voice phone must be approved by the carrier it's used on—you can't import or use unlocked devices, and you often can't even move them between US carriers. A virtual clone of the Alcatel Smartflip, AT&T's $62.99 Cingular Flip IV (made by Tinno) does a similar job of folding some smartphone features into a flip phone experience thanks to its KaiOS software, which supports common mapping, messaging, and social media apps. But its performance is sluggish enough that we still recommend the Sonim XP3 as our Editors' Choice.

The Flip IV's design is classic. It's a black plastic flip phone, at 4.13 by 2.14 by 0.74 inches (HWD) and 4.59 ounces, with a big 1.8-inch color screen on the front that shows the time and caller ID information. Open it up and you have a 2.8-inch, 320-by-240 LCD and a reasonably tactile chiclet-style plastic keypad where you can feel out the buttons without looking.

The phone charges via micro USB and has a standard 3.5mm headset jack. You can pop a microSD memory card underneath the removable battery. It isn't rugged or water resistant in any way, unlike the super-durable Sonim XP3.

Not Just A Flip, Not Yet a Smartphone

KaiOS bridges the world of simple voice phones and smartphones. If you're looking for a phone with absolutely no internet access, this isn't for you—the Flip IV phone requires a data plan, and you can't disable the web browser or the very small app store.

Rather, this phone is for people who still like the flip phone form factor, but who have friends or relatives who communicate through Facebook, Google Duo, or WhatsApp; people who want their calendars to sync or don't want to enter a thousand contacts by hand; or people who like a simple flip but still want to find locations with Google Maps. There's also a Find My Phone feature that isn't common on basic flip phones.

The home screen gives you icons for KaiOS's app store, Google Assistant, Google Maps, and YouTube, showing how this phone is different from most flips. The app store has a handful of simple games and utilities, an activity tracker, and Facebook, Twitter, and Whatsapp. All the apps are free.

The phone has a limited set of built-in apps

The Google Assistant icon spotlights how voice-to-text is available in pretty much any text entry field on this phone. That's especially useful with text messaging and WhatsApp, because the predictive text on here is pretty bad.

Google Maps includes voice search and directions, but there are no voice prompts, and you can't plumb it into your car's infotainment system. Still, it's better than what other flip phones offer.

The contact book and calendar sync with Google and Outlook, making it relatively easy to load contacts. The phone only handles 1,000 contacts, though, so if you have more than that in the synced account, you should cut them down on the server side or start a new account just to sync with this phone.

The phone also has music and video players (that play local files off of a microSD card), a news reader app, an email app, and a browser. The email app works with Google or Microsoft accounts and tries to display richly formatted emails, but images generally didn't load when I tried.

The Flip IV suffers from sluggishness. I don't have a Smartflip on hand to compare it w ith, but there's a distinct lag in the phone's dialer, and rendering either rich emails or web pages takes a long, slow time. My Flip IV also crashed at one point in the email app and had to be hard reset.

That's not entirely down to the Flip's slow LTE speeds. The Flip supports AT&T's bands 2/4/5/12/14, so it will get good coverage on AT&T's network, including on the specialized FirstNet network for public safety.

Running a speed test in the browser, I got 19.64Mbps down where I got over 100Mbps down using a Samsung Galaxy S10. But loading, rendering, and navigating web pages was much more sluggish than you'd expect with 20Mbps speeds. That's coming from the OS and chipset, not the network.

Photos are a flashback to days of yore

The Flip IV has a 2-megapixel camera, but the less said about that, the better. Photos are boozy, bleary, and blurry, like throwbacks to 2007. (I have photos from 2007 in my Google Photos and they look a lot like these.) The jerky 352-by-288 videos are also a throwback, and not in a welcome way. Low light? Don't even try it.

The web browser tries its best

Phone call quality here is fine, although it isn't up to the audio quality of the Sonim XP3. While the Flip IV has an okay speakerphone, the XP3 is 5db louder at its maximum volume, with richer sound thanks to a larger speaker cavity. There's some noise cancellation in the microphone. The Flip IV supports HD calling, although not EVS, the highest-quality form of calling only available on more powerful smartphones. There's no Wi-Fi calling, and you can't make calls through Whatsapp—traditional calling via the 4G network is your only option.

You can create groups, block numbers, use your own music for ringtones, and assign ringtones to individual callers (but not to entire groups).

For texting, you can use the built-in SMS app or Whatsapp. You should really use Whatsapp, as it's smoother and works better. The built-in SMS app can send and receive pictures, but not emoji. Group texts work in a chaotic way where they spew out an individual text to everyone on the list. Group texts in Whatsapp work like they're in Whatsapp, which means they work, as long as everyone has Whatsapp. You can dictate text messages, which turns out to be much faster than using the predictive text mode.

Battery life is good. I got 10 hours, 4 minutes of talk time in testing, and I'd expect about three days of standby.

The Best Flip for AT&T?

The AT&T Cingular Flip IV is an inexpensive flip phone with some useful internet features. If you're in a Whatsapp family or need Google Maps, it's worth considering. That said, the Sonim XP3 is a better pure voice phone. It's more rugged, louder, and has a more responsive UI, so it remains our top pick.