It turns out that the image of the Asus ROG Phone 3 was just a screengrab from a short hands-on video showing off the phone. Also, the ROG handset is not the only Snapdragon 865-powered device that Asus is working on, another was spotted at Geekbench.

You can see the new triple camera on the back as well as the ever-present ROG logo with RGB backlighting. But don’t let those distract you as you watch the video.

Anyway, the Geekbench database contains several results from an “asus ZF”, which is powered by the Snapdragon 865 (aka “kona”). Unfortunately, the benchmark only recorded the clock speed of the small CPU cluster, 1.8 GHz, so there’s no way to tell if the big cores have been overclocked like on the ROG 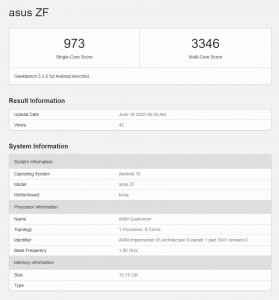 It does have 16GB of RAM, though, so it will be a powerhouse either way. Now, this might be another version of the gaming phone (which will be the company’s first with the S865 chip), but that “ZF” sounds suspiciously like “ZenFone”. The Zenfone 6 was announced in mid-May last year, so we’re due for a sequel.

Rumor has it that the Zenfone 7 and ROG Phone 3 will be announced in July.