Like Apple's Worldwide Developer Conference this summer, next week's presentation will be a virtual event. It kicks off at 10 a.m. PT / 1 p.m. ET from Apple Park, and will be live-streamed on Apple's website. 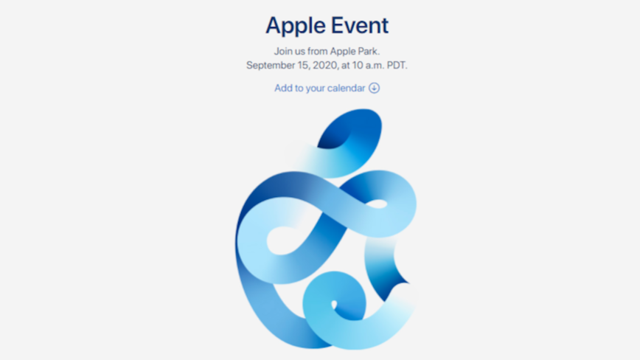 Apple today confirmed it will hold a Sept. 15 event, where it will likely unveil the iPhone 12 lineup and a new Apple Watch, among other things.

Few details were revealed; the announcement features a looping, snake-like Apple logo. Like its Worldwide Developer Conference (WWDC) this summer, next week's presentation will be a virtual event. It kicks off at 10 a.m. PT / 1 p.m. ET from Apple Park, and will be live-streamed on Apple's website.

The news comes after eagle-eyed Twitter users spotted an Apple Event emoji hashtag earlier today. That prompted people to suggest news might be coming this week, but it appears we'll have to wait a few days.

As for what to expect, the time is right for a new iPhone; last year's iPhone 11 lineup made its debut on Sept. 10. That was before COVID, of course, and Apple has already cautioned that its next iPhones might arrive later than usual. "As you know, last year we started selling new iPhones in September. This year, we project supply to be available a few weeks later," Apple CFO Luca Maestri said in July.

So, Apple might announce the iPhone 12 lineup next week, but not release them until October. Here's everything we (think) we know about Apple's newest smartphones.

Last fall also saw the arrival of the Apple Watch Series 5, so a Series 6 is likely on the agenda too. Here's what we thought of the new watchOS 7 beta.

Apple will probably announce the public launch dates for iOS 14 and macOS Big Sur, both of which are in public betas right now.