App Library intends to make it easier to find apps on your home screen, while a Messages upgrade lets you pin conversations, tag specific people, and more. 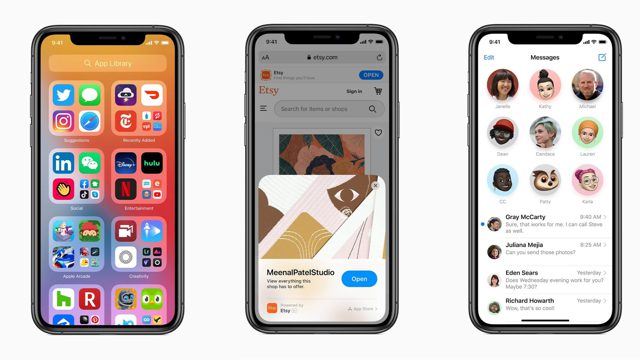 Apple today unveiled iOS 14, which allows for more customization on the home screen and in the Messages app, and bring a familiar iPad features over to iPhone, among other upgrades.

App Library intends to make it easier to find apps on your home screen. Up top is a search field with installed apps organized from A to Z. On the left is a suggestion section, which uses on-device intelligence to show the apps your iPhone thinks you'll want to access at any given time. On the right is a list of apps you recently downloaded for quick access. And below are customized groups of apps that you can configure how you please.

For those who want to mix it up and move away from Apple's now-familiar rows of apps, iOS 14 will let you drag widgets and drop them next to your apps, and pick how big or small you'd like them to appear. A Smart Stack option will display widgets based on the time of the day; news in the morning, meeting alerts during the day, and evening plans later on in the day, for example.

For times when you need an app to complete a transaction but don't yet have it installed, App Clips offer quick access. It'll load a smaller version of the app in question so you can pay quickly. App Clips will use Apple Pay and Sign In With Apple, so there's no need to create an account with the app you're using. The app won't clutter your home screen, but there's the option to install the full app later, of course.

For those who find it difficult to keep up with unwieldy group chats, Messages in iOS 14 will support inline replies. You can also @ mention certain people, and opt to only get notifications if someone tags you in a chat.

To get to a frequent contact or group chat fast, Messages will also let you pin conversations to the top of your screen, and assign a photo to a chat for quick recognition. A new design will make it easier to see who's in your chat. And much like FaceTime chat bubbles expand and contract based on who's speaking, the avatar of the person who messaged last will be largest.

For memoji fans, Apple promised 20 new hair and headwear styles, including the option to have yours wear a mask. There will also be new memoji stickers, including a hug and a fist bump.

Among the updates coming to Apple Maps is cycling information. The app can offer turn-by-turn directions based on where a particular city offers bike lanes and paths. It will detail whether a route goes along quite or noisy streets, what the elevation is, and whether there are stairs where it would be faster to dismount and walk up or down. Apple Watch owners can see this information on their smartwatches with watchOS 7.

Maps will also add electric vehicle routing, which will factor in weather and elevation to let you know when and where you can juice up your car. To start, it will be compatible with BMW and Ford vehicles, but Apple says it expects to add support for other EVs down the line, too.

Another environmentally friendly addition will be congestion and green zones so you can see where you'll be least likely to add to a city's pollution problem.

Apple Maps, meanwhile, will also launch in new countries, including the UK, Ireland, and Canada.

Speaking of cars, Apple showed off a digital key functionality that will let you leave the car keys at home and unlock and start your car with an iPhone.

The option will first be available on the BMW 5 Series, which arrives next month. But Apple says it will add digital key functionality to iOS 13 too, so BMW owners can try it out before iOS 14 launches. Once you have it, you'll just tap to unlock using NFC and place your phone on the car's charging pad.

You can also share digital car keys remotely, and select the level of access a driver receives (fewer options for teenage drivers, for example). If you lose your iPhone, turn off digital car keys via iCloud.

Apple says it expects to add support for other cars in 2021.

With iOS 14, Siri gets a redesign to make her a more subtle presence on your device. Rather than having Siri take over your entire screen, the virtual assistant's icon will appear on the bottom of your screen, much like Amazon's Alexa does inside apps.

If you're making a grocery list in Notes, for example, you can call up Siri to add things to it without leaving the Notes interface.

This one's been on iPad for awhile, but with iOS 14, you'll be able to minimize a video screen and continue watching as you move around to other apps. The video will continue playing in a small window overlaid on top of app you're using; tap to go back to the full screen or close it. You can also push it to the side slightly to obscure the video but continue listening to the audio.

Apple also teased a more compact incoming call notification that will drop down from the top like any other call alert rather than taking over the entire screen. This will also roll out on iPadOS, too.

When Does iOS 14 Launch?

Apple launched the developer beta today, while a public beta will be available next month. Look for the full release in the fall.