Amazon's Echo hardware continues to be popular with smart home fanatics and Alexa-enabled devices are now available in all shapes and sizes. One of Amazon's most unique Echo devices is the Amazon Echo Spot. The diminutive smart screen is perfect for a nightstand or desk with its 2.5-inch circular display and, today only, you can score one for just $29.99 today only via Woot. Available in black or white, the devices are offered 'Used – Very Good' so may have some cosmetic blemishes, though they are $60 less than a brand new model at Amazon and come with a 90-day warranty. 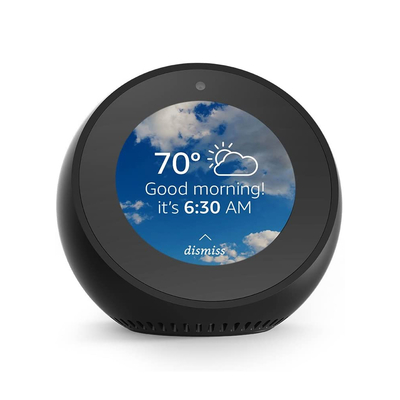 The Spot connects to Alexa to play music, read the news, answer questions, control your smart home, and more. Its 2.5-inch screen shows lyrics, news flash briefings, or simply lets you use the device as a clock. Offered used with a 90-day warranty.

The smart alarm clock-type device was released back in 2017, though the original Spot never got replaced by a newer model with most of Amazon's smart screen attention going to the Echo Show lineup. In fact, the Spot has been unavailable for some time so deals like today's are extremely rare. It's likely this Woot deal will sell out before the end of the day, so don't wait on it if you want one.

Echo devices with displays allow you to interact with people at your front door from your Ring Video Doorbell or see a live video stream from compatible smart security cameras like Amazon Cloud Cam or Arlo Pro systems. Additionally, you can do video calls using the built-in camera, hear the news, control your other smart home gear (like plugs and lights), and so much more.

These devices make great gifts for just about anyone or are a great way to add Alexa to more spaces of your own home. From easily allowing the kids to video chat with their grandparents across the country to setting up routines to help automate your life a bit, you won't regret picking an Echo smart screen up.

Like all Echo devices, you can also use the Echo Spot as a smart speaker to stream music from services like Amazon Music Unlimited and even have the display show lyrics. There's support for Apple Music, Spotify, Pandora, SiriusXM, TuneIn, and more so you can listen to whatever you like.

Shipping at Woot generally costs $6 per order, though you can score free shipping there by logging in with an Amazon Prime account before checking out. If you've never been a member before, you can start a free 30-day trial to score free shipping at Woot and Amazon, along with access to perks such as the Prime Video streaming service, exclusive members-only discounts, and more.

Future-proof your home with these great Wi-Fi 6 routers