12 Uses for Your Old Smartphone

Do you have an old smartphone lying around? Repurpose it! There are a number of ways you can reuse that old mobile device.

We each carry around with us a little supercomputer that can fit inside our pocket. It does everything we could ask it to do; it checks the weather, searches the internet, plays games, streams media, takes pictures, and analyzes data. Smartphones are great, except for the fact that newer, better versions are always on the horizon.

Most of us can probably eke out a few years with our smartphones, but the upgrade cycle means it's always tempting to splurge on a shinier model. You can usually save a few bucks by trading your old phone in when you buy a new one, but there are times you might end up with an extra, aging smartphone hanging around.

Instead of letting that phone collect dust, reuse it. If it connects to Wi-Fi, it can still be a handy addition to the household. Here are a few cool things you can do with your old smartphone. 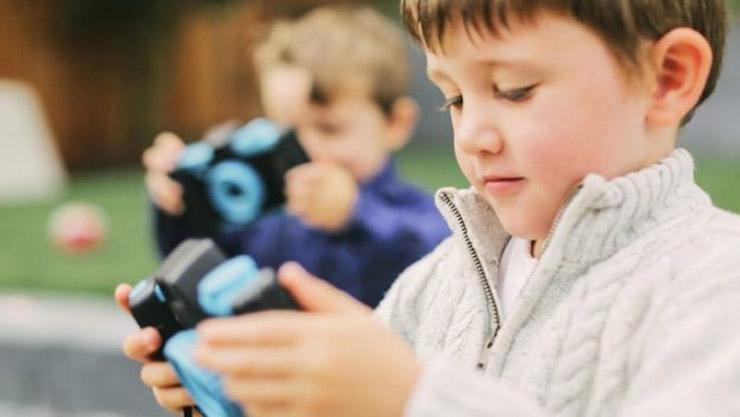 Turn that old smartphone into a camera for the kids. Pixl Toys sells the Pixlplay Camera, which houses a phone inside a protective case that resembles a classic camera. Together with the companion app, your child can take and edit photos right on the device. You don't need a wireless network for the camera to work and any images can be transmitted via Wi-Fi or a wired connection.

Pixl says the device fits most standard-size smartphones including the iPhone 4/5/6/7/8/X and many Android phones as large as the Galaxy S8, but won't work with iPhone Plus or XL size phones. Of course, you could just hand your kid the phone and let them snap pics without the Pixlplay, but you might want a add a case or screen protector first.

There are a ton of different mobile games for iPhone and Android, and many of them don't require an internet connection. If you have an extra smartphone lying around, why not make it a dedicated gaming system? Blow off some steam while you're lounging on the couch, or fire up a game once the kids are done taking photos.

If you find yourself communicating a lot via Skype, FaceTime, or any other video chat platform, your old smartphone can serve as a dedicated interface for video chats, as long as you have decent Wi-Fi coverage. The kids no longer have to borrow your phone to call grandma or their friends, and your smartphone remains open for incoming calls and other alerts.

Smart devices like the Echo Spot and the Lenovo Smart Clock can help you manage the time, but not everyone wants a microphone in their bedroom. Instead, turn that old smartphone's big display into an alarm clock that (hopefully) won't spy on you. Just download an alarm clock app

via Wi-Fi, place your phone on a stand, and you're good to go. If you tend to hit snooze in the morning, it's easy to grab the phone off its stand and keep it with you as you catch some more sleep.

For other phones, check out the low-tech Google Cardboard, which is available for phones from 4 to 7 inches.

Most media streaming devices come with their own remote control. But those remotes tend to be a little small. Whether you own an Apple TV, Fire TV Stick, or Roku, chances are you will (or already have) lost its remote. Instead of buying a new one, though, you can use your phone. Each service has its own mobile app; download it on your old device, link your account, and use your phone as a remote.

If you love books and comics, but don't want to purchase an eReader, use your phone. Download the Amazon Kindle app on iOS or Android, and sync up your purchases, Prime Reading, or even free e-books. On iOS, you'll have to purchase e-books on the Amazon website first (since Amazon doesn't want to give Apple a 30 percent cut of in-app book purchases), but when you log into the iOS app and refresh, your books will be there. Or read via Apple Books. Comics fans, meanwhile, can tap into Comixology; here are some of our favorite digital comic books.

If you have an Audible account, meanwhile, download the app and listen to your favor ite books. Carry your old device around the house with you, or connect it to a Bluetooth speaker

If you subscribe to a music-streaming service, you have access to just about any song ever made. Set up your old device up on a charging stand, and pop in some wireless earbuds or connect your phone to a Bluetooth speaker. Then crank up some tunes or tune into a podcast while cleaning the house, getting some work done, or just vegging out.

Contribute Your Phone to Science

As long your old smartphone still turns on, it's probably just about as powerful and capable as your late-90s desktop. So, why not "donate" some of those unused resources to a good cause? Currently just for Android, you can download the BOINC app (Google Play), which was developed by the University of Berkeley to harnesses your device's unused computing power for crowdsourced science.

You can help [email protected] search for alien signals, use computational power for health and sustainability research with IBM's World Community Grid, assist [email protected] in trying to avoid the planet getting hit by an asteroid, and other such projects. Choose which project you want to help, hook it up to your local Wi-Fi, and help our species progress into the future!

US law requires that all phones be able to call 911, even without a SIM card or connected data plan. That means no matter how old your phone is, as long as it has power, it will be able to connect with emergency services. Even in conditions where there would normally be limited service, the call should be able to go through.

While you will probably have have your phone on you at all times, it can't hurt to have a backup device just in case. For instance, you could keep an inactive phone in the car in case there's an emergency. You can also give the decommissioned device to an older relative who might not have a mobile device, but could use an easy way to contact emergency services just in case.